Alrighty, folks…it’s the Cleveland Brown segment of the Game Day Decrees and if you haven’t been keeping track of things so far this season, you definitely aren’t gonna know what I’m talking about. You probably feel like I did the first time I watched Dora the Explorer and wondered who the Hell that little girl was talking to throughout the show. It took a more experienced, more in-tuned, 8 year-old to inform me that when Dora asks a question, you are supposed to respond to her out loud. But see, I didn’t get the point because Dora can’t hear me anyway, so why would I even…whatever. Point is, it’s bullet-point time for the Browns because I can’t even give them the time of day to re-evaluate how bad they are. So here it goes:

The Browns head to Baltimore this week to battle the current AFC North division leader, those gotdamn Baltimore Ravens. Whew! That felt good just coming off my fingers. It means even more that the Ravens got to the top of the division by ending their four game losing streak, having not won a game since September 25th. It meant even even more that the Ravens beat their hated rival, the Pittsburgh Steelers, in dominating fashion. The fun started when Ravens’ receiver Mike Wallace (4 catches 124 yards, TD), who played the first three years of his career in Pittsburgh, caught a quick slant route, stiff armed a defender and ran 95 yards down the sideline for the first score of the game. 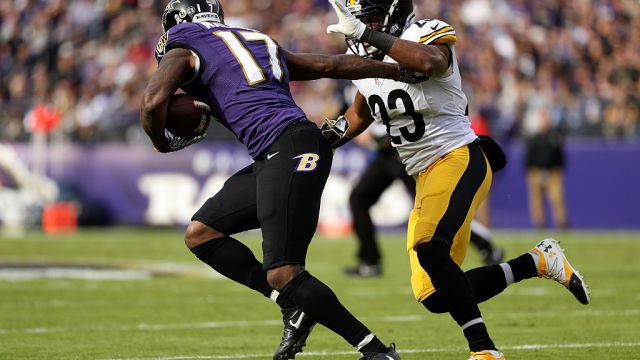 He finally proved to the Baltimore faithful that he is indeed a Crow on the right side of the Wall and can be trusted when the real war comes.

The Ravens’ defense was the star of this game – they locked down Pittsburgh’s high potent offense. They stifled Ben Roethlisberger, completely eliminated Le’Veon Bell who only had 32 yards rushing, and kept receiver Antonio Brown in check, preventing him from being a factor for the majority of the game. In the 3rd quarter, Joe Flacco broke out the pocket and ran downfield to convert a third down, and he slid awkwardly – when he rolled over, Flacco immediately grabbed for his surgically repaired left knee.

Listen, everybody in the B has been criticizing Flacco lately, and rightfully so. He simply has not played like the guy the Ravens need him (and are paying him) to be. Shit, after the interception Flacco threw in the 1st quarter of this game I was halfway to the backyard to put his jersey in the trashcan. But seeing Flacco limp to the locker room, I thought it was all over. I was instantly regretting every bad thing I ever said about the guy, hoping that if he somehow came back from this I would be more grateful of him. I even promised I’d go vote. But it turns out it was just Flacco’s knee brace that broke and he was perfectly fine, returning to the game three plays later to continue his below-average quarterback play. Late in the 3rd quarter, the Ravens’ D continued to make plays as lineman Brandon Williams tipped a pass in the air that was intercepted by Timmy Jernigan, leading to a Justin Tucker field goal. They put the nail in the Steelers’ coffin early in the 4th quarter when  Buck Allen got into the backfield untouched, blocked a punt, and rookie Chris Moore picked it up for a scoop n score to put the game out of reach. The fan in me is confident the Ravens will show up this Thursday night and blow the Browns out, taking outright control of the AFC North division, where winter is coming. But I know my Ravens just like I know members of my family – they are not gonna do the right thing. I fully expect the Ravens to struggle with Cleveland until the final quarter in the first of many Unk vs. Unk matchups that are scheduled to take place in Week 10.