Telling Packer fans to R-E-L-A-X right now is like convincing Hispanics that they gon’ be alright in America for the next four years. It’s all bad for the Cheeseheads after Tennessee put them over their knee and spanked the Pack like they were their daddy. The main culprit in that game was their defense. They were awful, just awful. They allowed over 160 yards of the rushing variety, including a 75 yarder on the opening drive. They also gave up four touchdown passes on the day. By the time Aaron Rodgers finally found Jordy Nelson to get the Packers on the board, they were down 21-0. Rookie Trevor Davis wishes he were still in college after fumbling a punt that Tennessee recovered and turned into points. Rodgers was able to water dance his way into the endzone on a 20 yard run and he was hit rather late on the play after he crossed the plane to cut the score to 35-22.

Rodgers’ teammates bum-rushed Tennessee’s defender that hit him, creating a much needed energy around the team – it appeared to rally them and give them the edge they were lacking all day.

Too bad the Packers’ defense wasn’t on the field to benefit from the scuffle, because they gave up another touchdown just two minutes later to put the game out of reach. The Packers drag their three-game losing streak with them to Landover to take on the Redskins. The Skins came off of their bye week and beat Minnesota at home with an impressive performance. They opened the game up with a 10-play touchdown drive capped off by a 4 yard pass from Kirk Cousins to Jamison Crowder. At the beginning of the second quarter, Cousins to the veteran tight end Vernon Davis for a 38 yard score

for the remaining 14:18 of the 2nd, the Skins’ defense disappeared. They managed to give up three touchdowns. They failed to tackle and consistently broke down in coverage. It didn’t help that running back Chris Thompson fumbled the ball at the end of the 2nd to give Minnesota great field position. After going up 14-0 to start the game they found themselves down 20-14 at the half. But in the second half, Cap’n Kirk took reign over the Enterprise and got rookie running back Rob Kelly to ride shotgun with him. They managed two field goals by Dustin Hopkins in the 3rd to regain the lead. In the 4th, the Skins’ defense redeemed themselves, shutting down Minnesota’s offense completely. Linebacker Preston Smith came up with an impressive interception 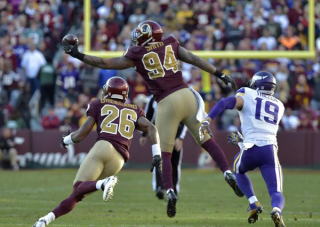 with just over five minutes remaining. Clinging onto a six point lead in the final minute, the defense held up strong as Preston Smith made another huge play sacking Minnesota’s Bradford on the last play of the game to keep the Vikings off the board and helping the Skins improve to 5-3-1 on the season. Washington will have to find a way to play 60 minutes of football, especially against the Packers’ offense that is much better than Minnesota’s. Cousins and Kelly should have many opportunities to make plays against Green Bay’s horrendous defense. The Packers however, are starting to see the light that most people see right before they die. Wait, how would anyone alive know what that light looks like? Maybe the Packers’ DBs know since they are literally walking dead. Anyway their entire season comes down to this game. Another loss would keep them at third place in the division and I don’t think they could rebound from that. This game between the Packers and Skins has the potential to be a good ol’ fashioned NFC shootout between two of the league’s most historic franchises.

TEXANS vs RAIDERS PATRIOTS vs 49ERS