Oakland proved once again last week that the best defense to have is one that quickly gives up points so your offense can get right back on the field to score themselves. The Raiders came up with an impressive win at home against Buffalo, who tried the exact formula we predicted could possibly give them a chance to hang with Oakland. The Raiders took a heavy dose of the Bills’ run game on the chin, giving up over 200+ yards on the ground. They were pounded on in the first half and found themselves down 10-3 in the 2nd quarter. Their defensive front was able to pressure the Bills totaling four sacks in the game, but they often struggled to get off the field on third downs, allowing the Bills to convert 9 of their 15 attempts. Oakland’s potent offense easily got the ball downfield but struggled to put touchdowns on the board on several drives, one in particular due to a dropped pass by Michael Crabtree in the endzone. The offense settled for three first-half field goals by Sebastian Janikowski and the Raiders found themselves down 10-9 at the half.  Early in the 3rd quarter it was more of the same – Buffalo ran over Oakland at will, breaking off huge runs and punching two rushing touchdowns into the endzone to take a 24-9 lead.

But that last punch in the jaw was all it took for the young Don David Carr to decide it was time he got mixed up in the family business. He sat back in the shotgun and picked apart Buffalo’s defense, throwing a touchdown pass into the back of the endzone – this time it was caught by Crabtree to finally get the offense on the board. On their next drive, rookie running back Jalen Richard broke off a 21 yard run to get the Raiders’ offense back inside the redzone. They handed the ball to Latavius Murray (82 yards, 2 TDs) who lunged in for the score to suddenly cut their deficit to just one point. The defense forced Buffalo to punt again after cornerback David Amerson made a great play breaking up a pass on 3rd down. They got the offense the ball back and kept their foot on the gas and Car threw his second TD of the day Amari Cooper for a 37 yard score to take their first lead of the game with 14 minutes remaining in the 4th. Raider’s punter Marquette King continues to prove he if isn’t the best punter in the league, he is definitely the punter who enjoys his job the most. He pinned the Bills down inside the four yard line with another great punt – a pivotal change in field position that would ultimately help Oakland win the game. With the Bills backed up in the shadow of their own goal line, the Raiders’ D made another amazing play. Khalil The Big Mack rushed into the backfield and got a hold of the ball while Tyrod Taylor was throwing. 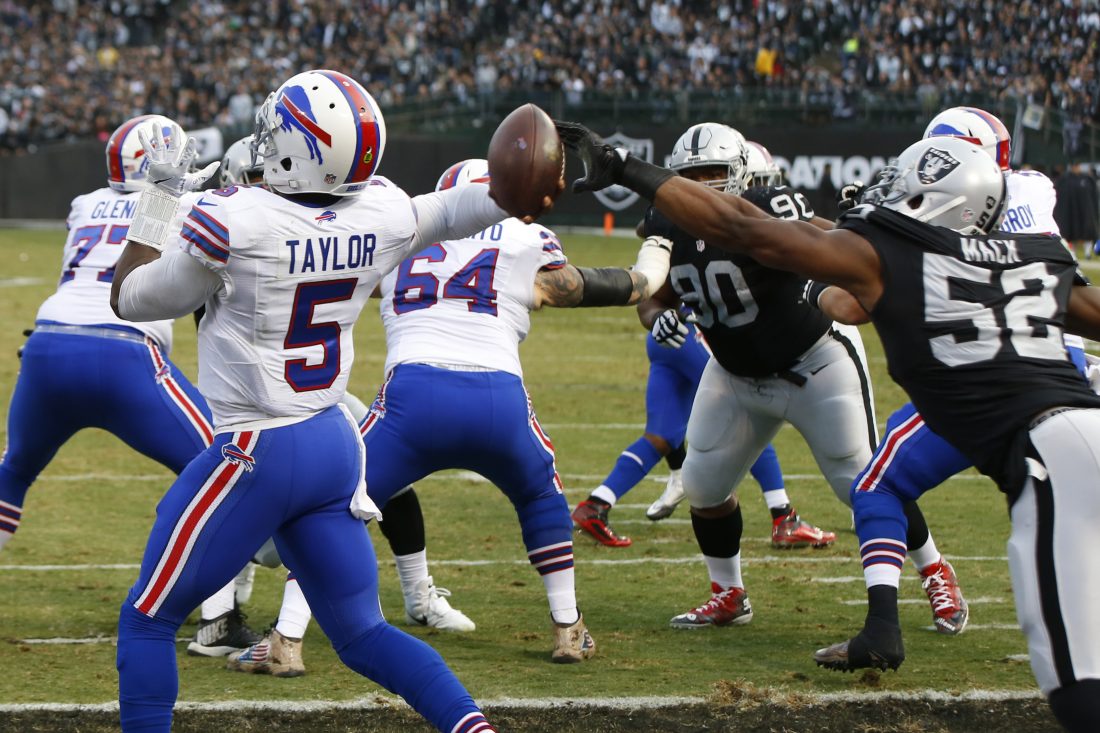 The ball flew straight up in the air and came down right into the hands of safety Nate Allen for the interception, and Allen set the Raiders’ offense up with another scoring opportunity. Four plays later Murray punched in his second touchdown of the day. The two point conversion pass from Carr to Seth Roberts capped off a 29-straight-unanswered-point comeback by the best team in the West. Oakland hopes to keep this momentum alive for the next four days when they head to Kansas City on Thursday night looking to avenge their last loss this season.

The Chiefs also came up with a big win last Sunday, theirs on the road against an explosive Atlanta team that had always played their best football at home. The Chiefs survived another back-and-forth affair in which they proved again they can win in many different ways. They responded to Atlanta’s first score with a touchdown of their own, led by two big catches from tight end Travis Kelce (8 catches 140 yards). The latter got the Chiefs’ offense inside the 5 yard line and running back Spencer Ware took it from there with a touchdown run to make it a 7-6 game (their extra point was blocked). On their next drive, Alex Smith tried to extend a 3rd down play by moving around in the pocket but he was blindsided, lost the football, and Atlanta recovered. Down 13-6 midway through the second quarter Alex Smith went back to Kelce who bullied his way downfield and set up Ware’s second 3 yard touchdown of the game – this time a pass from Smith in the flat to tie the game.  The Chiefs managed to keep pace with the Falcons early on but many questioned if the Chiefs’ secondary – primarily their back end – could make enough plays to stop the Falcons’ prolific offense. But Chiefs’ safety and Atlanta-native Eric Berry had other things in mind. People in the Atlanta area said Eric couldn’t come back home. And guess when he heard that??? While he jumped a route in the middle of the field and took an interception back 37 yards TO THE HOUSE right before halftime! He even handed a gift to Mom Dukes in the stands. 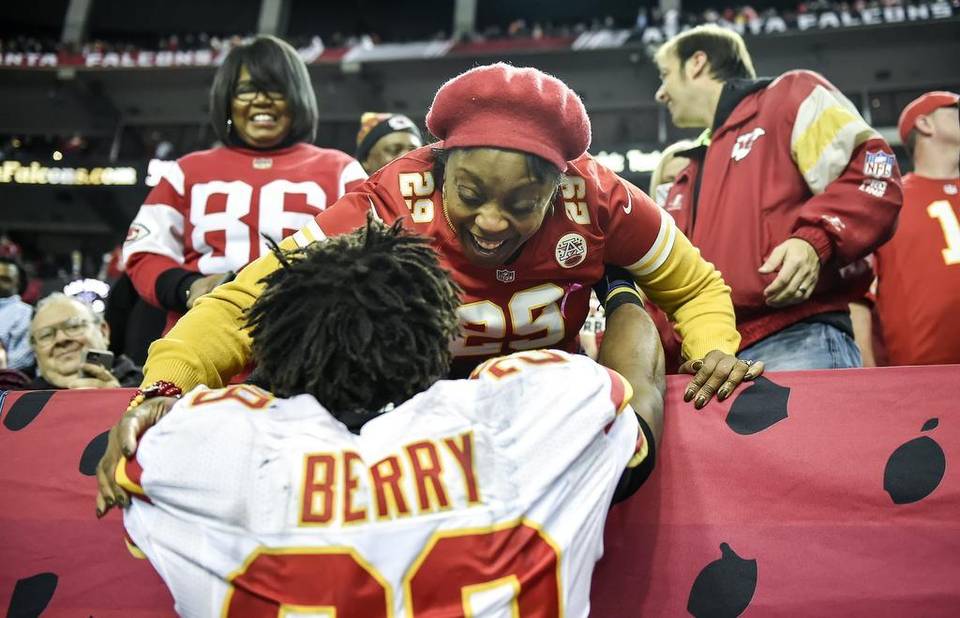 With a 20-16 lead in the 3rd quarter, the Chiefs were at midfield and appeared to be punting the ball back. But instead, Andy Reid relied on deception and trickery, snapping the ball to the speedy Albert Wilson, who sneaked his way through the line and broke into the open field. Wilson ran 55 yards into the endzone to take a 27-16 lead. 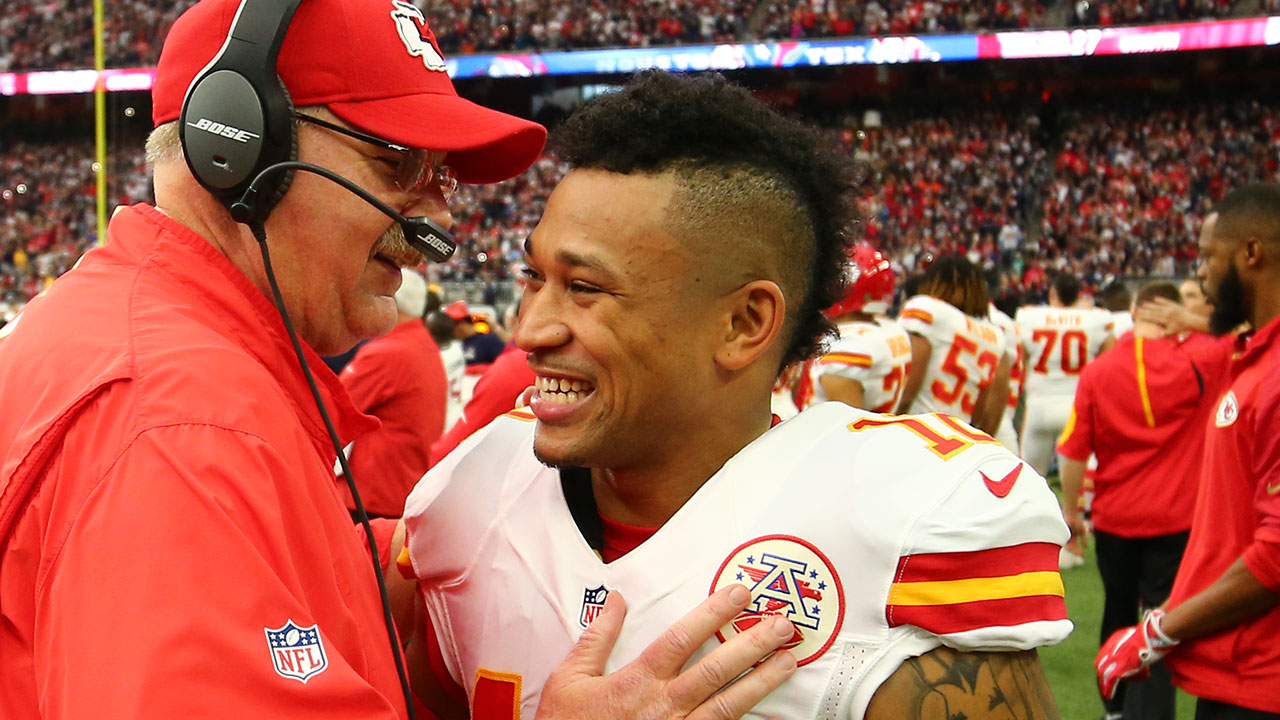 But that was the last touchdown the Chiefs would score as Atlanta mounted their comeback. They orchestrated two 80 yard drives, the last one to take a 28-27 lead. Atlanta attempted the two point conversion and when Matt Ryan tried to find his tight end on the outside, the hometown kid Eric Berry jumped the route for his second interception and had nothing but green astroturf in front of him. He returned the pick for two points, giving Kansas City the lead and ultimately their ninth win of the season. What a great moment for Berry, who just two years ago could not play football while he returned to Atlanta to undergo treatment for Hodgkin’s lymphoma.

The Chiefs will need Berry and the rest of their defense to play well this Thursday as they have a chance to take the AFC West division lead with a win. They were the last team to beat Oakland, a commanding performance back on October 16th when they handled the Raiders in Oakland 26-10. In that game the Chiefs had a similar gameplan that Buffalo tried last week – they ran the ball effectively 40 times, controlling the clock for a plus-16 minute time of possession. Alex Smith was efficient, throwing just 3 incomplete passes the entire game. They limited Oakland’s running game and only allowed one of their standout receivers to have an impact. But that game was almost two months ago and we can all agree both of these teams have changed a lot since then. The Raiders have shown game after game they have the resolve to overcome adversity, and the versatility and depth to rely on different weapons to win games. I think the X-factor in this game will be how each team handles the weather as temperatures are expected to be below freezing in Kansas City. It will be interesting to see if the Raiders’ passing game can flourish in these conditions, and if the Chiefs have the ability to repeat their performance on the ground as they did against the Raiders way back in Week 6.