The San Diego Chargers lost their third game in a row last week and their second of the season to the Oakland Raiders. It was yet another Chargers game where they showed their potential and ability to compete against the top teams, but they fail to put together a full four quarters of quality football. They came out of the gate sharp in their powder blue unis and the offense took an early lead when Phillip Rivers chucked the ball downfield to a wide open Travis Benjamin, who took the 47 yard TD reception in for the score. Their defense held the explosive Oakland offense to just a field goal in the first quarter. They halted the Raiders’ momentum on a redzone opportunity when linebacker Melvin Ingram forced his first of two fumbles on the day – the ball was recovered by teammate Kyle Emanuel. The defense continued to shine in the early stages of the second quarter, coming up big again in the redzone when cornerback Trovon Reed made a diving interception in the middle of the field to keep Oakland out of the endzone. Rookie standout Joey Bosa continues to shine in his first season as he sacked Derek Carr at midfield to stall another Oakland drive. A 17 yard run by Ronnie Hillman got kicker Josh Lambo in range for a 35 yard field goal to extend their lead to 10-3. Things were looking up for the Chargers.

The defense exceeded their quota on big plays and started to fall apart. The Raiders marched downfield with ease in just over a minute and scored their first touchdown to tie the game at the half. Midway through the third quarter, Phillip Rivers and the Charger offense regained the lead on a methodical drive downfield, led by receiver Dontrelle Inman, who made a couple of receptions to move the chains. Inman has come on the scene as a viable and reliable receiver for Rivers by leading the teams with five receptions in the game. The Chargers capped off the 7-play 77 yard drive with in a 7 yard touchdown pass from Rivers to rookie tight end Hunter Henry. But they couldn’t put a complete 7 on the scoreboard because the extra point kick was blocked. And in the 4th quarter, the expected Charger meltdown began. They flat out collapsed. Rookie running back Kenneth Farrow did the inexcusable – he fumbled the ball just 12 yards away from his own goal line, which gave the Raiders an easy field goal to tie the game again.  Their defense followed by giving up a 33 yard run and a 22 yard pass completion to set up another field goal by Oakland – this one would give up the lead. Down three points with the ball and just over two minutes remaining, the Chargers offense struggled against Oakland’s pass rush. Rivers was sacked, which led to a 4th & long, and while standing on his own goal line, he threw his final pass into coverage and it was intercepted by Oakland to end the game. 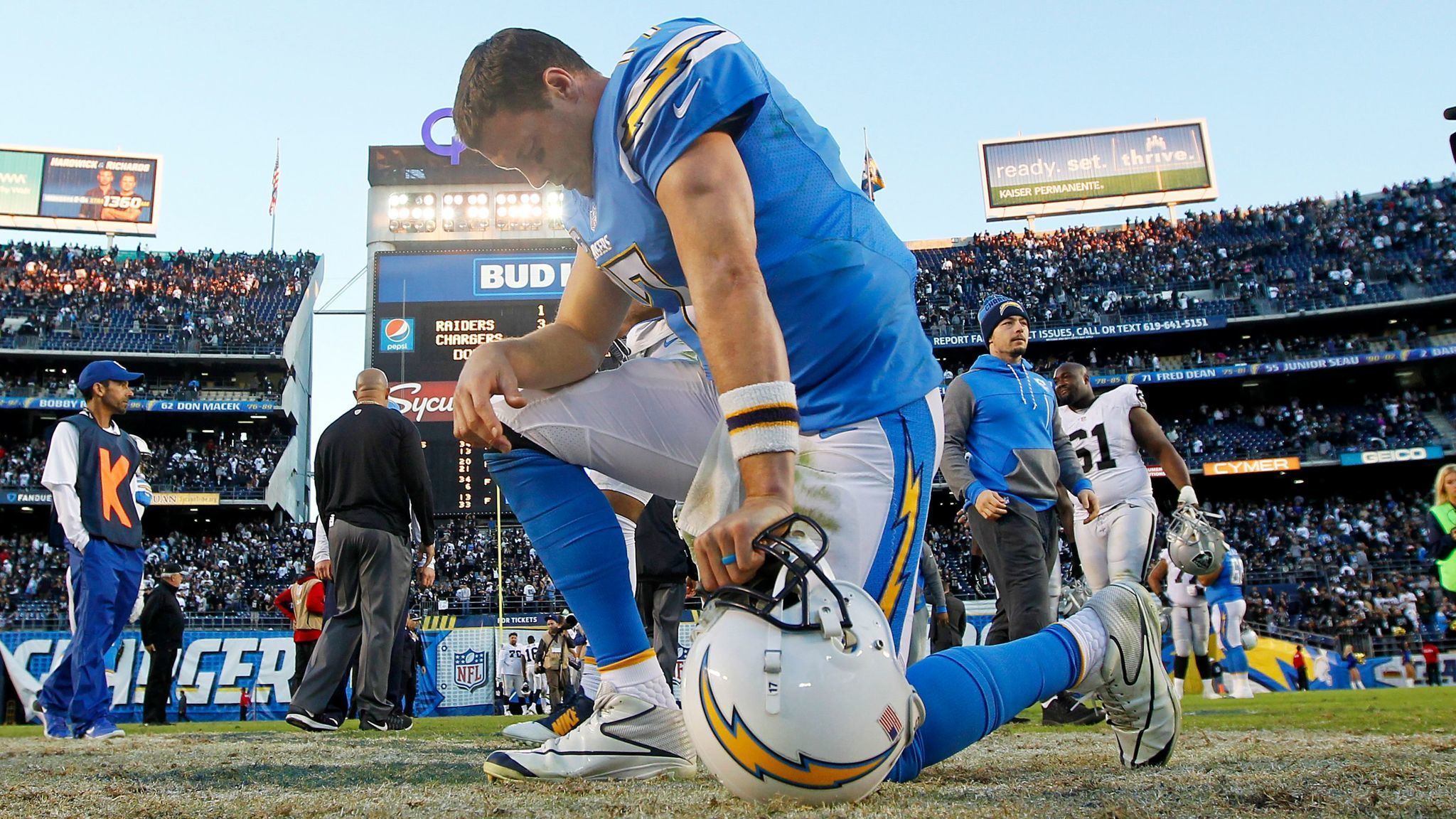 At 5-9 the Chargers will ultimately suffer their second losing season in a row and find themselves on upset alert this week as they face the win-less Cleveland Browns who are trying to avoid going 0-15. Last week I thought the Browns had a chance to upset the struggling Buffalo Bills, but I was clearly mistaken. However, I am semi-confident the Browns have a chance to win this week against San Diego who usually struggle in early games after they’ve flown across the country. The Chargers are also infamous for donating wins to less fortunate teams ever since they let Drew Brees walk, so we’ll see how this Bum Fight ends when it’s all said and done.

VIKINGS vs PACKERS REDSKINS vs BEARS