The Miami Dolphins were one of the quiet winners from last week after they came up with a win in New York in a game that no one wanted to watch. It featured two backup quarterbacks and a lack of prominent names, but the Dolphins’ stars came to play and made enough of them to keep the team in the playoff hunt. They fell behind early after their defense failed to cover or tackle the Jets’ receivers. They gave up a 40 yard touchdown on the opening drive and appeared to be ready to lay down knowing they didn’t have QB Ryan Tannehill out there to give them their best chance. As the Jets were in the redzone threatening to increase their lead, Cameron Wake got into the backfield and straight bonged Bryce Petty who had no choice but to fumble the ball and Ndamukong Suh recovered. Matt Moore filled in for his first start of the season and was amazing. He found tight end MarQueis Gray to get the ball to the goal line. On 3rd down Moore rolled right, almost slipped and fell, maintained his balance and threw the ball to the sideline where only Dion Sims could get it to tie the game. 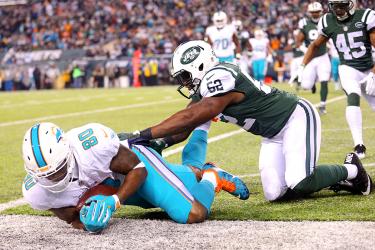 Two minutes later, Wake made another great play for the defense when he dropped back into coverage and made an acrobatic play for a big fella, coming up with an interception. Matt Moore took advantage when the Jets sent the house at him on 3rd and long, he stood in the pocket and threw the ball downfield to Kenny Stills who was open deep across the middle for a 52 yard TD catch – his only catch of the game. After the half, Moore made maybe his only mistake of the game when he hung a deep ball in the air too long and it was intercepted. But Miami’s special teams unit came up big when Walt Aikens pulled off the trifecta – he rushed off the edge to block the punt, scooped it up, and took it back 11 yards for the score. 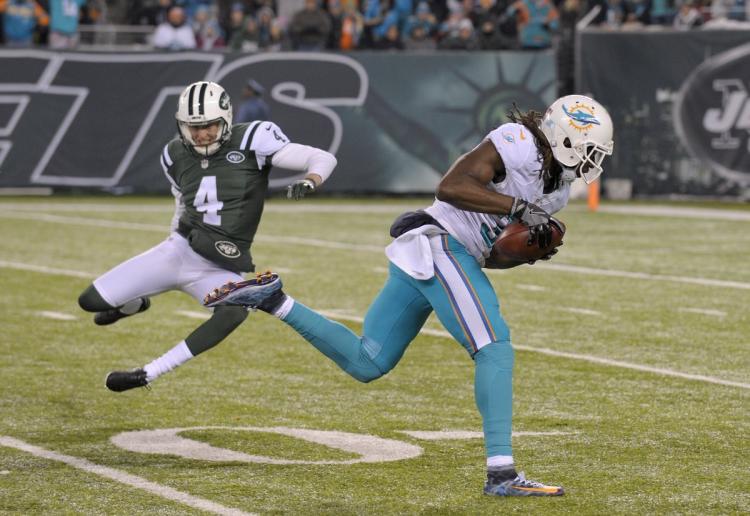 On their next play, the defense joined the turnover party when corner Tony Lippett was tested downfield and the youngin’ went up and snatched the interception out of the air. Receptions by Jarvis Landry (3 catches 108 yards, TD) and Dion Sims got the Dolphins on the goal line, and Moore went back to Sims for another goal line TD catch – his second of the game. The Dolphins decided they weren’t done and added one more score to completely route the Jets. Moore got his fourth touchdown pass when he found Landry on a short pass in the middle of the field, and Landry turned on the burners for a 66 yard score to give the Dolphins their ninth win on the year. They will head to Buffalo this weekend for a crucial divisional game against the Bills, who picked up their seventh win  of the season.

The Bills were granted one win that 14 other teams (and eventually 16) were given when they saw the Cleveland Browns on their schedule. The Bills took care of business, relying on their number one ranked rushing attack that netted 280 yards in the game. They were led by LeSean McCoy who totaled 153 yards and two touchdowns. The Bills’ offense got freaky with it toward the end of the first quarter with a direct snap reverse to Brandon Tate, who ran about 10 yards before he actually got control of the ball. 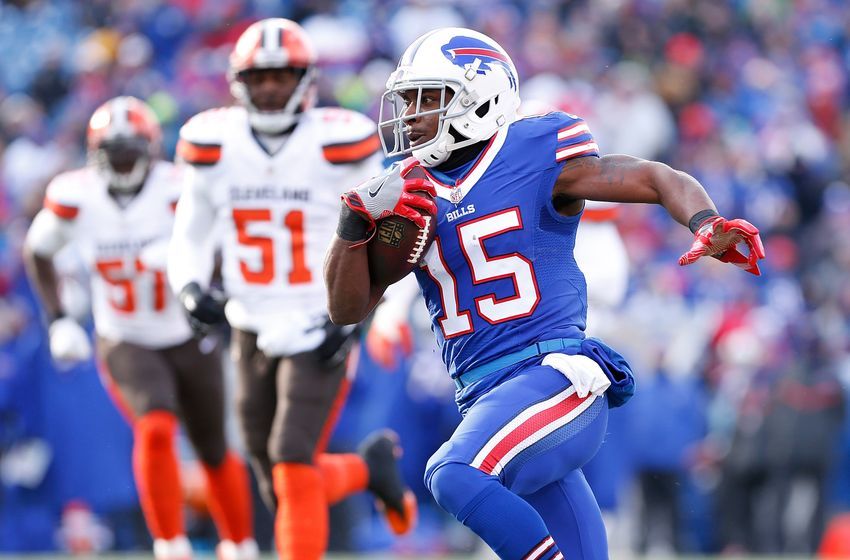 His 30 yard run set up running back Mike Gillislee, who shifted his way into the endzone with a 3 yard touchdown run to give the Bills a 10-3 lead. Later in the quarter Tyrod Taylor showed he can play the position the Bills signed him to play when he threw a dart to tight end Marquise Goodwin to convert a 3rd & 22. Taylor connected with his other tight end Charles Clay who was wide open in the endzone and had to make a diving catch back to the ball for a 19 yard TD to take a 17-3 lead. Midway through the 3rd quarter, Taylor contributed to the 5K effort against the Browns with a 28 yard run of his own, which set up a 3 yard TD run by McCoy to add to their lead. The Bills’ defense continued to rock Robert Griffin III, sacking him five times and preventing the Browns from gaining any momentum. 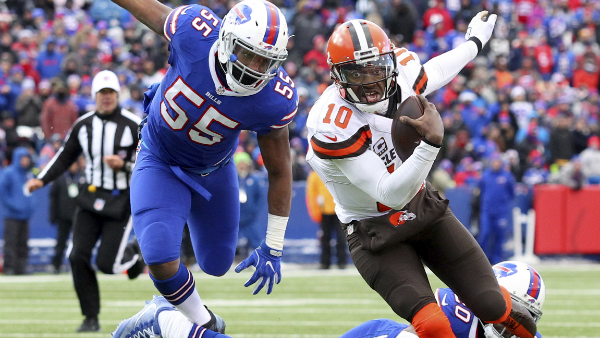 McCoy added his second touchdown run of the game to put themselves out of reach of the Browns, improving to .500 late in the season. The Bills will have a chance to play spoiler against their division rival this week if they can beat Miami and keep them out of the playoff race. It will also be needed if the Bills players want to keep Rex Ryan as their head coach. As for the Dolphins, they will have to keep Matt Moore clean in order for their offense to put up points but will need to find an answer to slow down the Bills’ running game that has seemed unstoppable the last few weeks.

FALCONS vs PANTHERS GIANTS vs EAGLES