King of the South 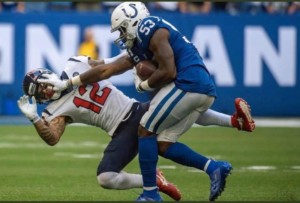 Indianapolis – The Indianapolis Colts (4-2) have now won two straight games and three straight against the Houston Texans. QB Jacoby Brissett, who finished with 26-of-39 for 326 passing yards and a career best 4 touchdowns to lead the Colts past the Texans 30-23 and reclaim the AFC South lead. Brissett had a career best passing yards, a career best passer rating (126.7), and was sacked once in the game. Houston (4-3) got off to a rocky start by kicking fields goals in three red-zone trips in the first half. QB Deshaun Watson was 23-of-34 with 308 passing yards, one touchdown, two interceptions, and was sacked three times as the Texans tried to rally a comeback. With 26 seconds left in the game, Watson threw an interception to All-Pro LB Darius Leonard to sealed the win for the Colts. Colts did get a boost in the receiving game from WR Zach Pascal, who had six receptions for 106 yards (career-high) and WR TY Hilton caught six passes for 74 yards..Marlon Mack rushed 18 times for 44 yards, he could not get anything going against the Texans 8th rank rushing defense..Colts has scored at least 23 points in 11 consecutive home games..Colts defense still has not allowed a 100-yard rusher in now 24 consecutive games. Great win by the Indianapolis Colts.