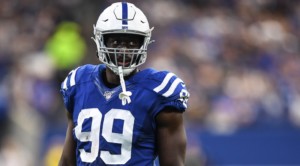 Justin Houston [Defensive End] played just three games against the Denver Broncos [As a Chief] since the 2016 season his stats totaled up in those 3 games are.. 18 Tackles 7 Tackles for a loss..7 QB Hits 6 Sacks 1 Forced Fumble

Safe to say he’s had his way with Bronco QB’s!!!…and former Baltimore Ravens and 2013 superbowl champion MVP..Joe Flacco the starting quarterback for the Ravens defeated the 49ers by the score of 34-31, handing the 49ers their first Super Bowl loss in franchise history. Is no diffrent… The Broncos offensive line unit allowed a struggling Kansas City Chiefs defense to apply pressure and be in the Broncos’ backfield all night long in a week 7 in a blowout lost to the Kansas City Chiefs ending in a score of 30-6… Joe Flacco completed 21-of-34 passes for 213 yards, zero touchdowns and zero interceptions not bad for the former raven I guess…But (according to scout.com the Kansas City Chiefs are projected to have and will be the 21st ranked defense for the remainder of the season..