Forsaken By The Football Gods 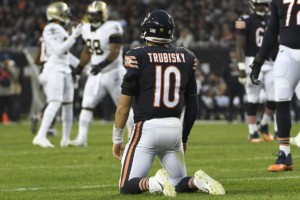 Mitchell Trubisky the 6’2 215lbs quarterback from The university of North Carolina that the Chicago Bears drafted in the 1st round of the 2017 NFL draft as their number two pick…HE WAS ABSOLUTELY AWFUL, HORRENDOUS, HORRIFIC, HORRIBLE (by now I’m sure you get the picture) for the entire afternoon outside of two garbage drives late in the fourth quarter. He was consistent in missing open receivers on what it seemed as every route, On one route Mitch threw a pass downfield to Allen Robinson in double coverage that just looked like pure desperation.(😂😂)
and this was before the QB injured his left shoulder. That run game (17 yards on seven carries) didn’t help them either, far too many missed opportunities with the passing game..For all of the fans that drafted Mitch in their fantasy league the ounce of optimism around Trubisky you may get is just to drop him..at this point I would have far more faith in The Jacksonville Jaguars starting rookie QB Garner Minshew. Dear Bears fan my heart bleeds for you all, Shout Out Red-O lol.