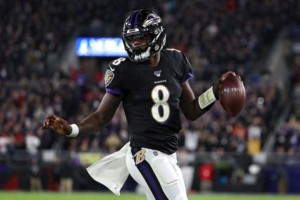 The Baltimore Ravens were really if we are being (REAL WITH OURSELVES) was the first real team that the Patriots’ defense had to play their whole season — and the Ravens definitely showed up and showed out. Yes there are teams running option football, but the Ravens utilize this style of play for their offense like no other team the league has seen and of course it helps to have a 22 year old 6’2 212lb quarterback from the University of Louisville in which by the looks of it probably has a 40 time of 4.30 flat, Opposing teams who have played the Ravens have said it is almost an impossible task to try and prepare for that offense in just one week, Jackson, being the most dangerous running threat as a quarterback that the league has seen since Michael Vick in his hay day playing for the Atlanta Falcons. In the Ravens’ 37-20 win over the Patriots on Sunday night, LJ not only beat the Patriots physically being with his legs and his arm, he beat them with his mind. The Patriots just about did every thing they could to try and stop that explosive offense but failed almost at every attempt. After the game, starting quarterback Lamar Jackson said
“They went ‘Cover Two.’ They went ‘Cover Zero.’ They went Quarters. They went ‘Cover Six,” “They were doing it all.” So “Who is Afraid of The Big Bad Wolf?
…Definitely not Lamar Jackson and the Baltimore Ravens.

Who Is Chief Among You? Keep Their Heads Spinning