New Ravens GM Eric DeCosta wrapped up his 2nd Draft as Ravens GM, amongst the conditions of Covid-19 & still was able to put together a masterful run through the young talent in this years crop & once again hit it out of the park.

DeCosta & the front office navigated it beautifully from Rounds 1-7, filling a need for a young ILB in Round 1 & ending it w/ a diamond in the rough S in Round 7, but also drafted 10 players overall & every single one complimented this team even more. Once again drafting 2 WR’s in for the second year in a row, DeCosta continues to build this team around his young QB, also drafting an explosive RB, & snagging 3 picks in the 3rd round alone, while also getting 2 O-Lineman. This Draft was a complete splash & DeCosta showed why this front office is known as one of the best in the league.

Here is a recap & breakdown of every pick, as well as the Grades of each pick.

The first player ever drafted out of LSU by the Ravens front office, Queen gives this team exactly what it needs as a sideline to sideline linebacker that will feast as a member of this defense, due to the big bodies up front. The kid is a tackling machine, who can get to the ball quickly, & has great ball skills as well as the ability to drop back & cover, despite starting only 1 season @ LSU. He is undersized, but that will benefit this defense as he will be able to roam free while the line wreaks havoc. Queen earned Defensive MVP honors in the National Championship Game for LSU, as he registered 2.5 tackles for loss, .5 a sack & 8 tackles in the win over Alabama as well as 85 tackles & 3 sacks in his final season.

Queen is a game changer that has incredible instincts & fits exactly what this Ravens defense wants to do. He plays like a Raven in every way! 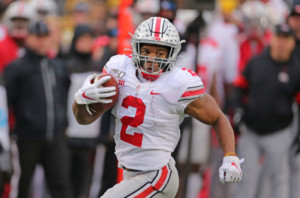 The only player in Ohio St. history to rush for over 2,000 yards in a season, while scoring 21 TD’s on the ground. Dobbins is the perfect compliment in this offense, that already set a record for rushing attempts & rushing yards in a season. Dobbins is an absolute playmaker & a threat to break it anytime he touches the ball, which gives this already potent offense another weapon to use out of the backfield, where he is just as dangerous catching it as he is running. He is a balanced back & runner w/ quick feet & great vision, he can make defenders miss easily & is also very durable, he never missed anytime in 300 games @ Ohio State.

Dobbins is another great leader that also brings character & attitude to an already motivated group. He fits exactly what the Ravens want to continue to do on offense. 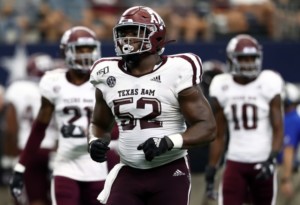 Madubuike is a fast defensive lineman, so fast that he ran a faster 40 than both Browns QB’s Baker Mayfield & Jets QB’s Sam Darnold. He is a physical specimen, who can take over games & has high level pass rushing skills, combined w/ the ability to run down opponents. While a little undersized, he is still physical enough to bang inside on the interior & can eat up running backs as well. He had 40+ pressures in his final season & posseses good acceleration to get to where he needs to be. He tallied 45 tackles, including 11.5 for loss, while recording 5.5 sacks.

Madubuike will fit in perfectly in the Ravens defensive scheme due to his size & versatility. He will have to beef up a little bit but has all the tools to be an every down player.

Duvernay is a magnet for the football. He catches almost anything that comes his way & is an absolute playmaker, he has the speed to go up against any defensive back & is incredibly explosive, but also very quick. He can run deep seam routes or deep posts & is also dangerous on quick routes & slants as well as screen passes & short routes. He adds even more speed to this already fast offensive group. Duvernay ran a 4.39 40 yard dash & reminds many of former Raven WR Steve Smith w/ his speed, his toughness, his size & his hands. He should fit in perfectly in this offense alongside the other playmakers already in place. He caught 106 passes for 1,386 yards & 9 TD’s for Texas in his final season.

Duvernay is an excellent value pick that has huge upside & will be used in many ways that utilize his speed & hands. He is a major threat in open space & a matchup nightmare for DB’s. 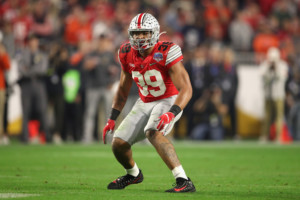 A steal by Eric DeCosta & the front office here as Harrison is a plug & play LB that can contribute right away & should team up w/ Patrick Queen to make a solid impact for an already stout defense. While Queen is a sideline to sideline linebacker, Harrison plays more downhill, but can also cover, despite allowing some plays in man coverage where he has struggled. He can full gaps well & is a thumper when he makes contact. His size should help him, as he stands 6’3 & his ability to read defenses should also benefit him moving as he still has a lot of upside. He had 75 tackles, including 16.5 for loss & 3.5 sacks in his final season.

The Ravens doubled up on Harrison after drafting Queen because this level of talent was just to good to still be on the board & filled their needs. Coaching will benefit this kid so much & his ability to fill gaps & plug holes will be valuable to this defense. 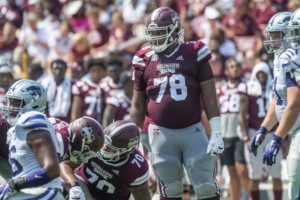 This kid is massive & powerful, he can maul defenders in the run game & that plays right into what Baltimore wants to do offensively. He’s long but lacks range, but he can definitely win in a phone booth due to his footwork & knowing how to move his hips. He has excellent vertical push & knows how to get an angle, but his best attribute is his power. He only started one season for Mississippi St., but still started all 13 games, including a team high 821 snaps, 819 @ LT & 2 @ LG. He wound up starting 13 of 26 career games played & allowed just 2 sacks 1 QB hit in 397 snaps in pass protection.

Phillips can shut down an opponent if he gets his hands on them & can downright forklift defenders. He is tenacious & strong, can take on any blocker due to his length & knows how to pass protect, but he excels in run blocking.

A four year starter @ Michigan, Bredeson made an immediate impact both on the field & in the locker room, starting all 13 games in his last season. He tenacious, powerful & hard nosed, has great length & packs a wallop when he makes contact. He has a physical frame & is an intelligent blocker who does a good job on double teams & has great use of his hands on the interior. This kid is a monster, who despite not being able to change direction quickly in pass protection is still able to make up for it w/ his talent alone. He was hailed as the best pass blocking guard in the country by PFF College w/ 451 snaps in pass protection w/ out a hit or sack allowed.

Playing in 50 career games w/ 46 starts as a LG, he has the knowledge of the game & the tenacity to fit right in on this team & in the NFL. Losing a HOF G in Marshal Yanda to retirement hurt, but this kid will compete for that starting job right away. 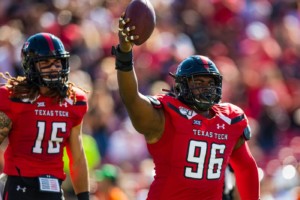 A 3 year starter @ Texas Tech who started all 37 games in his career, Washington is a physical player, using his bull rushing skills to harass QB’s on passing downs, as well as being able to play the run due to his ability to take up space on the interior. He occupies a lot of room & is very physical for being recruited as an offensive lineman. He tallied 39 tackles, including 5.5 for loss & 2.5 sacks to go along w/ 2 pass breakups in his final season. He has an attitude that coaches will love & has been tagged as a “future coach”, his tough mentality & brute strength make him a tough matchup for opposing lineman. He plays w/ force, despite being a little undersized. He will certainly add depth to this already potent & versatile defensive line.

This kid is known for his work ethic & leadership. He will blend well w/ the cast of characters that the Ravens already have in the locker room & he will help out due to his ability to diagnose plays & separate to set the inside edge. 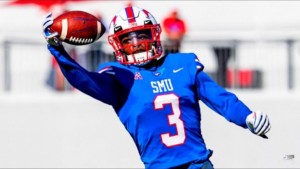 This kid can run all the routes because he just knows how to get open whenever he wants. A speed burner who will be used in many different ways in this Ravens offense, his quickness & extraordinary ball skills make him a threat whenever he has the ball in his hands. He will play more in the slot in this offense as well as contributing on special teams & even as a return man due to his speed & hands. He can catch anything thrown his way & can track down balls w/ his body control & focus, but his routes are somewhat rounded which leaves them open to being jumped. Proche is the second receiver taken in this draft by Baltimore that accumulated over 100 catches (111) in his final season, while scoring 15 TD’s & creating matchup nightmares for defenses.

Proche will be used all over the field to utilize his speed & instincts. He loves the 50/50 challenge & can compete w/ the best when the ball is in the air. He creates space & is can make some insane grabs because his hands are so good.

This kid still being on the board in the 7th round is an absolute steal! This kid was high on most coaches & analysts boards, yet somehow slipped all the way to the 219th pick where Eric De Costa wasted no time in drafting him. Stone is a highly intelligent defensive stud, who has the ability to read routes early & trigger down on top of them. He uses his above average body control in everything he does & is a stubby split safety, that can shove & press receivers off the line & re-direct routes. He has a lack of length & speed but makes up for it w/ his high football IQ & eyes that can almost see things before they happen. He recorded 70 total tackles, including 46 solo & 1 INT (pick 6) in his final season.

He is quick to find his pursuit angle & does not hesitate to come down & stop the run. Stone has great instincts & is light in his feet. He will learn from some of the best & was a great way to cap off an already amazing draft.

DeCosta once again nailed a draft for the second year in a row & made an already dangerous team even better. It’s hard to improve a team that had 14 wins last season, but E.D. did just that, he improved this team on every level – snagging a franchise LB, a future stud RB, a young defensive beast, 2 possible starters on the O-line, another depth move to get another young D-lineman, 2 speedy, tough receivers & a young ball hawking safety. This group of youngsters will definitely make their name known here in Baltimore & will continue to solidify Eric De Costa’s legacy right next to Ozzie Newsome. This draft was special, just like last year’s. The Ravens are continuing to build something special & all we can do is sit back & watch this young group make their way in the NFL. Good things to come in the future here in Charm City. The excitement is gonna be running wild to see all this young talent blossom on this team.

Ravens – What they Gained vs. What they Lost. The Return Of *Sports