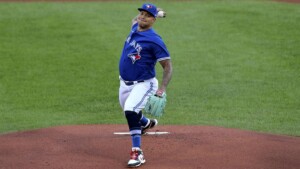 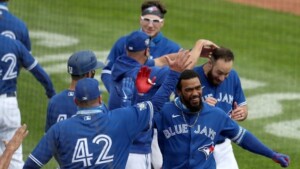 Game 3 : Blue Jays 6, Orioles 5 – Toescar Hernandez singles in the bottom of the 9th to bring home the tying & game winning runs as the Blue Jays walk it off again against the O’s. Cavan Biggio, Randal Grichuck, Vladimir Guerrero Jr & Rowdy Tellez each drive in a run a piece for the Blue Jays. Ryan Mountcastle homers twice (#1 & #2) for his first 2 career homeruns & Pedro Severino adds another on an RBI single for the O’s who have now lost 6 in row against the Jays this season. 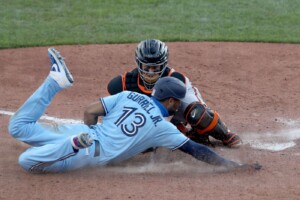 Game 4 : Orioles 4, Blue Jays 3 (11 innings) – Jose Iglesias & Bryan Holaday each double in a run in the top of the 11th, Iglesias drives in 2 & also throws out the tying run @ homeplate in the bottom of the 11th. Keegan Akin goes 4+ shutout innings in his 1st major league start, as the Orioles hang on in extras to avoid the sweep & beat the Blue Jays for the first time this season. Lourdes Guirrel Jr has 3 hits & drives in a run for Toronto, but is also thrown out @ home to end the game.

The Orioles play 2 extra inning games & nearly take 3 out of 4, despite losing 3 out of 4 in a hard fought 4 game series. The O’s now head home to host the New York Mets.

Tight Situations You Can Met On It