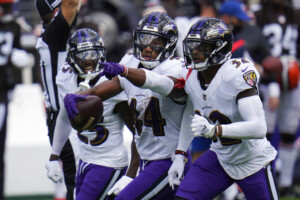 Ravens 38, Browns 6 : Week 1 – Recap & Grades : Offense – Lamar Jackson throws 3 TD’s passes, 2 to Mark Andrews & Hollywood Brown grabs 5 passes for 101 yards. The Ravens also rush for 107 as a team, led by 45 from Jackson.
Grade : A
Defense – This unit gets gashed the ground, giving up 138 total rushing yards, as Kareem Hunt gets 72 on 13 carries. They do harass Baker Mayfield all day though, forcing him into a 33.3 QBR, sacking him twice & grabbing an interception.
Grade : A-
Special Teams – Justin Tucker connects on his only FG attempt & Sam Koch boots it away 3 times for 125 yards. Devin Duvernay registers 64 yards on 2 kick returns & James Proche has 26 on 2 punt returns.
Grade : A
Coaching – The entire coaching staff deserves a round of applause. The game plan was spot on, they took advantage of a battered Browns secondary & everybody seemed to be on the same page from the jump. This team was ready to play from the tunnel.
Grade : A
Overall Grade : A
GO RAVENS!!
#MoreOfTheSame