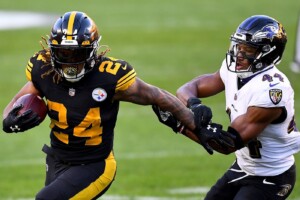 Steelers 19, Ravens 14 : The Replacements – The Ravens go into Pittsburgh missing nearly half of thier starters, but still play a gutsy game, when all the cards were stacked against them, showing a lot of fight in a tough loss on a Wednesday. In a sloppy start by both teams, Robert Griffin III is picked off by Steelers CB Joe Haden, who takes it back 14 yards for a TD to put the Steelers ahead 6-0 as Chris Boswell misses the extra point. After a fumble by WR Ray-Ray McCloud on the 16 is recovered by S Anthony Levine & then Gus Edwards runs it in from 1 yard out, 4 plays later to put the Ravens ahead 7-6 in the 1st. Boswell hits on FG’s of 25 & 27 yards in the 2nd & Ben Roethlisberger finds WR JuJu Smith-Schuster on a 1 yard TD pass in the 4th. Trace McSorley replaces Griffin III & finds Hollywood Brown on a 70 yard TD pass to make it 19-14 but the Steelers convert on a huge 3rd down to hold on to the ball & put the game away. Baltimore will now return home to host Dallas on Tuesday night.
Bal (6-5) vs Dal
Pit (11-0) vs Wash
GO RAVENS!!
#TheHeartOfARaven