Seattle Storm : The Mariners bring the rain to Baltimore as they take 3 out of 4 from the O’s in 2 doubleheaders including sweeping the 2nd twin build.

Game 1, Doubleheader Game 1 : Mariners 4, Orioles 3 (8 innings) – The Mariners win their 3rd extra inning game of the season in as many tries as Ty France homers in the 1st, Tom Murphy goes deep in the 2nd & Seattle builds an early 3-0 lead. Jose Urias hits a 2-run shot in the 5th for the O’s & DJ Stewart ties it on a single in the 7th before Kyle Seager puts Seattle ahead for good on a double in the 8th, as the O’s lose their 4th in a row. 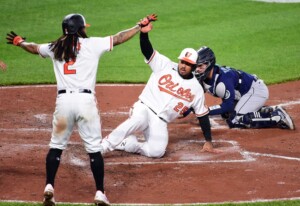 Game 2, Doubleheader Game 2 (7 innings) – Orioles 7, Mariners 6 – Jose Urias wins it on a walk off single in the 7th as the O’s rally from a 4-0 deficit to win it. Jose Marmolejos hits a 3-run bomb in a 4-run Seattle 3rd, but Maikel Franco doubles home 3 & scores on a single by Ryan Mountcastle that ties the game as the O’s score 4 in the 3rd as well. Trailing 6-5, Sam Haggerty ties ties the game on a solo shot in the 7th before Urias ends it on a single up the middle in the bottom of the inning.

Game 3, Doubleheader Game 1 : Mariners 4, Orioles 2 (7 innings) – Marco Gonzales allows just 2 runs on 3 hits in 5 innings, he strikes out 5 & walks 2, while his offense gives him just enough offense to pick up the win. Trey Mancini hits a 2-run shot in the 1st but Mitch Hanger adds a 2-run blast in the 5th to tie it before J.P. Crawford puts the Mariners ahead for good on a 2-run double in the 6th as the Orioles drop their 5th in their last 6 games. 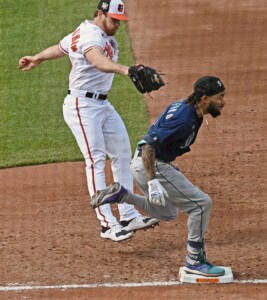 Game 4, Doubleheader Game 2 : Mariners 2, Orioles 1 (7 innings) – The Mariners take 3 out of 4 from the O’s by sweeping the Doubleheader, capping off a frustrating 4 game series for Baltimore. Dylan Moore hits a solo shot in the 3rd before Freddy Galvis goes deep in the bottom of the inning & ties it. Mitch Haniger goes deep in the 5th to put the Mariners ahead for good & the Seattle bullpen does the rest in relief of starter Justin Dunn, who allows just a run on 2 hits & strikes out 6 & walks 2.

The Orioles will look to put this series behind them as they now hit the road & head to Texas for 3 against the Rangers over the weekend.
⚾️⚾️⚾️
GO O’S!!
#ForcesOfNature