Texas Hold ‘Em : The Orioles come into Texas losers of 6 of their last 7 games but get back on track by taking 2 out of 3 in the lone star state. 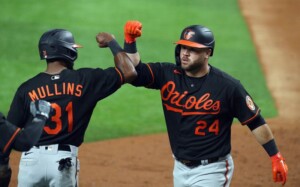 Game 1 : Orioles 5, Rangers 2 – Rio Ruiz goes deep in the 4th & DJ Stewart hits a 2-run shot in the 5th to back up a solid outing by starter Jorge Lopez, who goes 5 solid innings, allowing 2 runs on just 2 hits, striking out 8 & walking 1, to pick up his first win of the season. Freddy Galvis goes 2-3 w/ a double & a triple, scores twice for Baltimore. David Dahl & Nick Solak hit back to homers in the 5th for Texas, the only 2 hits allowed by Lopez. 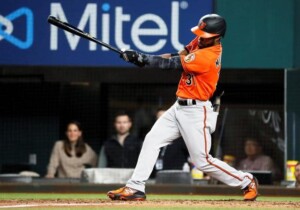 Game 2 : Orioles 6, Rangers 1 – After struggling for most of the night against Rangers starter Dane Dunning, who tosses 5 shutout innings, gives up 5 hits, while striking out 5 & walking none – The O’s finally break through against the Texas bullpen in the late innings. Cedric Mullins ties it on a single in the 7th, Trey Mancini puts the O’s ahead on a double & Ryan Mountcastle adds a sacfly to score Maikel Franco, who also hits a 3-run bomb to put the game away in the 9th. The Orioles improve to 6-2 on the road, while they are only 1-6 @ home.

Game 3 : Rangers 1, Orioles 0 (10 innings) – Nate Lowe singles home the winning run in the 10th to win it for the Rangers in a greatly pitched game by both teams. Kyle Gibson pitches 8 shutout innings, allowing just 4 hits, striking out 6 & walking none as he duels w/ Baltimore ace John Means, who goes 7 shutout innings, allowing just 3 hits, walking 2 & striking out 9 as both teams had zeros into the late innings before heading to extras when Texas walks it off & ends a 5 game home losing streak. Baltimore falls to 6-3 on the road.

The Orioles lose the finale but still win the series as they now head across the gulf coast to Miami to play the Marlins in a short 2-game series after a day off on Monday. They will then return to Baltimore host Oakland for 3 over the weekend.