Split Decision : The Orioles split a crucial 4 game series w/ the Yankees @ home as they battle in all 4 games & have to dig deep to win it in extras in the finale. 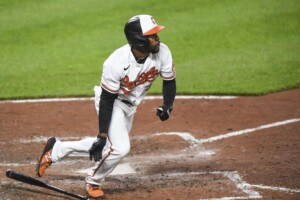 Game 1 : Orioles 4, Yankees 2 – Cedric Mullins homers twice & Matt Harvey pitches 6 strong innings, allowing just 1 run on 3 hits, striking out 5 & walking 3 to give the O’s another quality start. Mullins hits solo shots in the 1st & 7th innings, Freddy Galvis doubles home a run in the 2nd to back the outing by Harvey, who retires 11 in a row at one point, as the O’s win against the Yankees @ home for the 1st time this season. Gio Urshela has 2 hits, including an RBI single for New York.

Game 2 : Yankees 5, Orioles 1 – Corey Kluber has his best outing in 2 years, as he goes 6 2/3 innings, allowing just a run on 6 hits, walks 2 & strikes out 5, while getting the run support he needs as Aaron Judge drills a solo homer in the 3rd, Kyle Higashioka adds another solo shot in the 4th & Giancarlo Stanton lifts another solo shot in the 7th to put the game away. Maikel Franco reaches on an infield single to drive a run in the 4th. Starter Bruce Zimmerman is tagged for 4 runs on 9 hits, in just 3+, he walks 1 & strikes out 3 for Baltimore. New York is 9-0 when both Judge & Stanton homer in the same game. 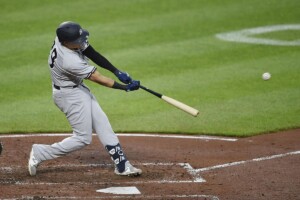 Game 3 : Yankees 7, Orioles 0 – Domingo German tosses 7 shutout innings, allowing only 3 hits, strikes out 6 & walks only 1, combines w/ reliever Michael King on a 4-hitter as the Yankees continue their dominance @ Camden Yards. Mike Ford drills a solo dinger in the 1st, Gio Urshela hits a 3-run blast in the 3rd & Clint Frazier caps off the home run derby w/ a solo homer in the 8th. O’s starter Dean Kremer os shelled for 6 runs on 10 hits in 4 1/3 innings, walks none & strikes out 4, Trey Mancini has 2 of the O’s 4 hits on the night. 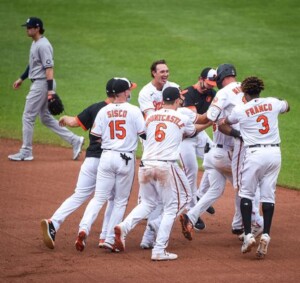 Game 4 : Orioles 4, Yankees 3 (10 innings) – Trey Mancini singles home a run in the 1st & adds a solo shot in the 6th, Cedric Mullins’ scores from 1st on a double by Austin Hays in the 8th but the Yankees tie it on a ground rule double by Gleyber Torres & it goes to extras before a sacfly by Mullins walks it off for the Birds as Ramon Urias scores from 3rd to win it in the 10th. Roughed Odor provides 2-run single in the 5th for New York & Giancarlo Stanton has 3 hits.

Baltimore now hits the road & heads to the Westcoast to play a weekend series w/ the Athletics, who took 2 out of 3 in Baltimore the last time they played.