Bird Fight : The Orioles lose 2 our of 3 to the Blue Jays despite having a chance to win the series in Game 2 but let it slip away as Toronto rallies back in the 9th inning to win in a heated, dicey game. 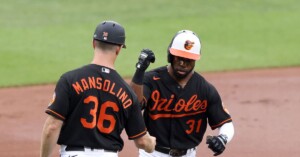 Game 1 : Orioles 7, Blue Jays 1 – Cedric Mullins homers twice on his T-shirt night, Thomas Eshelman pitches into the 5th inning & the Orioles snap their 8-game losing streak & win for the 6th time in their last 8 games @ home. Mullins hits a lead off shot in the 1st & drills a 3-run shot that caps off a 5-run 8th inning. Eshelman, just recalled from Triple-A Norfolk, allows 3 hits in 4 2/3 innings & takes a No-Hitter into the 5th before allowing a solo homer to Lourdes Gurriel Jr. He allows 1 run on 3 hits, walks 1 & strikes out 3. Freddy Galvis drives in a run on a double & scores on a single by Maikel Franco in the 8th. Baltimore wins for the first time in their last 9 games after returning home from a rough road trip that still has them reeling. 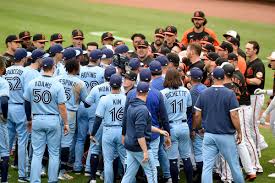 Game 2 : Blue Jays 10, Orioles 7 – The Orioles homer 6 times in the game, the first time they’ve done that since 2016, but the Blue Jays rally for 6 runs in the 9th inning to come back & stun the O’s. Marcus Semien & Vladimir Guerrero Jr. both hit solo shots in the 1st for Toronto, Semien would homer twice in the game. Ryan Mountcastle hits a solo shot in the 2nd, a 2-run blast in the 4th that is followed up by a DJ Stewart solo homer as the O’s go back to back & the benches clear after Jays starter Alek Manoah hits the next batter, Maikel Franco & is ejected from the game. Mountcastle caps off his 1st ever 3 HR game, when he launches another solo shot in the 6th & Cedric Mullins hits a solo shot, his 2nd of the day in the 7th. Toronto rallies though, scoring 6 runs w/ 2 outs in the 9th, including a 2-run double by Guerrero Jr., who also scores on a double by Randal Grichuk as the the Jays close out the Birds to stun the home crowd & end a 5-game losing streak. 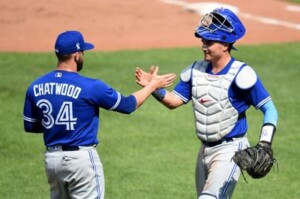 Game 3 : Blue Jays 7, Orioles 4 – Reese McGuire has 4 hits, including 3 doubles, his 1st 4-hit game since 2019, as the Blue Jays spoil the Orioles Father’s Day & take their first series since taking 2 from the Marlins on June 1-2 & get back to .500 in the process. Trey Mancini homers twice, as he hits a solo shot in the 1st & a 2-run bomb (the 100th of his career) in the 8th for the O’s as he continues to have an All-Star season. Hyun Jin Ryu breezes through 7 innings of work, allowing 1 run on 3 hits, walks 1 & strikes out 4 to pick up his 6th win, he retires 17 of the last 18 he faces. Teoscar Hernandez doubles home a run & scores on a single by Cavan Biggio in a 4-run Toronto 5th against O’s starter Matt Harvey, who is now 0-8 since May 7th & has not completed 5 innings once during that span. McGuire doubles home a run & scores on a single by Bo Bichette in the 8th as the Blue Jays pull away. Pedro Severino also hits a solo shot in the 8th for Baltimore, who has now lost 10 of their last 11.

The Blue Jays came in losers of 5 in a row but are able to right the ship as they take the series. The O’s continue their homestead w/ a 3-game series against the Houston Astros as the schedule doesn’t get any easier.