Jay Walking : The Orioles lose 3 out of 4 in Buffalo which is serving as Toronto’s current home, also are outscored 31-12 in the process as the Jays roll over the O’s again. 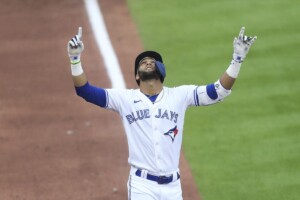 Game 1 : Blue Jays 9, Orioles 0 – Lourdes Gurriel Jr. hits his first Grand Slam in a 6-run Toronto 1st inning against O’s starter Dean Kremer as the Jays blow the game open early & never look back, extending the Orioles road losing streak to 20 games in a row. The O’s have now been shut out in back to losses of 9 runs or more for the first time since 1936. Kremer allows 6 runs on just 2 hits & a career high 5 walks in just 1/3 of an inning, the shortest outing of hits career. Vladimir Guerrero Jr. takes over sole possession of the HR lead w/ a solo blast in the 3rd & Marcus Semien doubles home a run & scores on a double by Bo Bichette to add to the lead. Baltimore ties the 1916 Philadelphia Athletics for the 2nd longest road skid in AL history, their road record is 11-26. 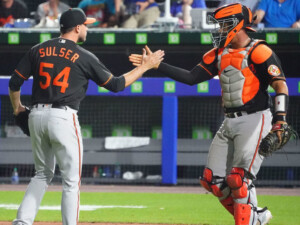 Game 2 : Orioles 6, Blue Jays 5 (10 innings) – The Orioles score 5 runs in the 8th inning to cap a huge late rally to shock the Blue Jays & an end their 20 game road losing streak & win for just their 2nd time in the last 16 games. George Springer hits a solo shot in the 2nd to put the Jays ahead & Vladimir Guerrero Jr. adds another solo bomb in the 3rd to excite the crowd on his bobblehead night, as he continues to lead the league in homeruns. Trailing 5-1 in the 8th, Ryan Mountcastle’s infield single scores Cedric Mullins, Anthony Santander singles to score Freddy Galvis & Austin Hays doubles to score Mountcastle & Santander as the O’s tie it. Pat Valaika walks w/ the bases loaded in the 10th to give the O’s the lead for good & Cole Sulser works the 9th as the Orioles snap their skid & end the Jays 5 game winning streak as well. Baltimore is now 12-26 on the road.

Game 3 : Blue Jays 12, Orioles 4 – Vladimir Guerrero Jr. hits his league leading 26th HR, Teoscar Hernandez & Randal Grichuk also connect on longballs as the Jays rout the O’s, using a 4-run 3rd inning to blow the game open early. Guerrero Jr. drills a 2-run shot & Hernandez adds a solo blast in the 3rd & adds a 2-run single in the 6th, Grichuk launches a 3-run shot in the 5th & adds an RBI single in the 6th in the blowout win. Toronto scores 4 runs apiece in the 3rd, 5th & 6th innings & all 12 runs came w/ 2 outs in an inning. Hyun-Jin Ryu gives up 7 hits in 6 2/3 innings of work, allowing 4 runs (all in the 7th inning), he walks 2 & strikes out 3. The Orioles score 4 times in the 7th, as Pedro Severino singles home 2 & Cedric Mullins doubles home 2 more but it would not be enough. Konner Wade & Alexander Wells make their major league debuts in this game, as Wade works 1 1/3 & Wells goes an inning. Baltimore has now lost 15 out of 17. 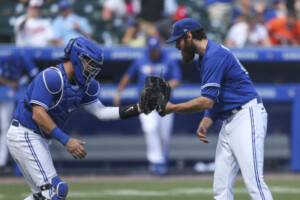 Game 4 : Blue Jays 5, Orioles 2 – Vladimir Guerrero Jr. drives in 2 runs to up his major league- leading RBI total to 66 as the Jays beat the O’s to take the series & also win for the 7th time in 8 games. Ryan Mountcastle hits a solo shot in the 1st to put the O’s ahead, but Vladimir Guerrero Jr. breaks a tie game in the 3rd w/ a 2-run double, running his RBI total to a major league-leading 66 & scores on a 2-run double by Cavan Biggio in the 5th. The Jays pound out 12 hits as a team & got 2 hits a piece from Biggio, Marcus Semien, Teoscar Hernandez & Reese McGuire as they win for the 7th time in 8 games, it was also their 34th game w/ 10 or more hits, tying them w/ Houston for the most im the major leagues. Ramon Urias doubles home a run to cut the lead to 1 in the 5th but the Jays would get 2 back on the Biggio double. Baltimore has now dropped 16 of 18.

The O’s lose 3 out of 4 in Buffalo & will now head down to Houston to play the Astros for 3 & head back to the West Coast to play the Angels for 3 over 4th of July Weekend.

Astronomical Domination Houston, You Have a Problem