Houston, You Have a Problem

Houston, You Have a Problem – The O’s come into Houston feeling low but leave riding high as they sweep the Astros @ Minute Maid Park for the 1st time in Franchise history. 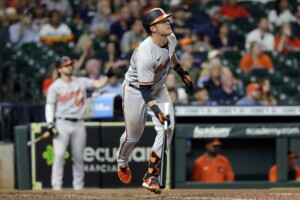 Game 1 : Orioles 9, Astros 7 – The Orioles score 5 times in the 8th inning to win as Austin Hays drills a tiebreaking 2-run homer & Pedro Severino adds a 2-run double & scores on a 2-out double by Ramon Urias to break the game open. Zack Grienke allows 3 runs on 8 hits in 5 innings but gets a no decision as he leaves after 5 innings of work, he strikes out 4 & walks 1. Ryan Mountcastle gives the O’s the lead w/ an RBI single in the 1st & then again in the 5th on a solo homer before the Astros tie it again w/ 2 in the 7th. Miles Straw singles home a run & scores on a sacfly in a 3-run Houston 9th but the O’s hang on to win. It’s only the 2nd win in the last 16 games for the Orioles @ Minute Maid Park. Baltimore pounds out 15 hits as a team – Cedric Mullins & Austin Hays each tally 3 & Mancini, Mountcastle & Severino each have 2, Mountcastle drives in 3 runs. 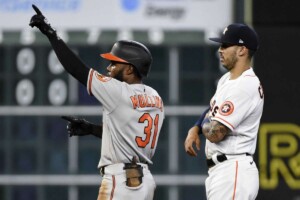 Game 2 : Orioles 13, Astros 3 – 1 night after accumulating 15 hits, the O’s rack up 16 & take another one in Houston, to shock the Astros. Cedric Mullins homers to lead off the game & the O’s keep going while never looking back. Mullins has 4 hits, including an RBI double in the 7th to put the Birds ahead, drives in 2 & scores a run, Austin Hays’ 2-run single in the 5th tacks on 2 more, he also singles home a run in a 5-run 8th, in Anthony Santander drills a solo shot & Maikel Franco adds bases loaded, 3-run double to break the game open. Ramon Urias & Austin Wynns hit a pair of 2-run homers in a 4-run 9th against Astros infielder Robel Garcia. Both teams lost their starter in the 2nd inning due to injury & the bullpens combine to use 9 relievers on the night. Abraham Toro drives in 3 runs for the Astros, who have now lost 3 in a row & 4 out of 5 following an 11-game winning streak. Baltimore will go for the sweep in Game 3. 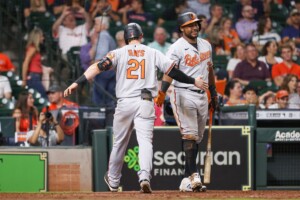 Game 3 : Orioles 5, Astros 2 – 1 week after being dominated & swept by the same team @ Camden Yards, the O’s pull off a sweep of their own as they take down the Astros in a dominating fashion of their own & turn the tables. The O’s pick right back up where they left off the last 2 nights, as they jump on Houston starter Luis Garcia for 4 runs in the 1st inning. Ryan Mountcastle doubles home 2 & scores on a single by Maikel Franco & Pedro Severino adds a sacfly to tack on another. Austin Hays homers for the 2nd time in the series, adding a solo shot in the 8th. Matt Harvey goes 4 1/3, allows 2 runs on 4 hits, walks 2 & strikes out 3, he retires the first 13 hitters he faces, until Michael Brantley singles in the 4th. Houston goes just 5-26 w/ men in scoring position & gets outscored 27-12 by a team they just swept 26-3. Baltimore sweeps Houston for the first time since 2008 in Baltimore & their first ever @ Minute Maid Park.

The Orioles are the only team in the league to sweep both the Astros & Red Sox w/ both sweeps coming on the road. The O’s will now remain on the road as they head to the Westcoast to play the Angels for 3 over 4th of July weekend.