Sho Time : Coming off of a sweep in Houston, the O’s are swept away themselves, as Shohei Ohtani homers 3 times in the series & the Birds lose on 2 heartbreaking walk-off’s in the opener & the series finale.

Game 1 : Angels 8, Orioles 7 – 1 day after being named an All-Star for the first time, Shohei Ohtani homers twice & scores the winning run in the 9th as the Angels rally to walk it off against the Orioles. Trey Mancini hits a solo shot in the 1st & Domingo Leyba adds a solo shot in the 2nd (his first career HR) as the O’s take the early lead against Angels starter, Griffin Canning. Former Oriole Jose Iglesias drills a 2-run shot in the 2nd to toe it but the O’s score 4 times in the 3rd, as Anthony Santander laces a 2-run double & scores on a double by Pedro Severino to increase the lead. Ohtani’s solo shot in the 3rd cuts the lead to 3 & Max Stassi’s RBI single adds another as the Angels get 2 in the inning. Ohtani blasts a 2-run shot in the 4th to give the Angels the lead but Austin Hays ties it on a double in the 6th before Ohtani walks, steals 2nd & scores on Jared Walsh’s single off of Paul Fry in the 9th. Baltimore has it’s 3 game winning streak snapped. 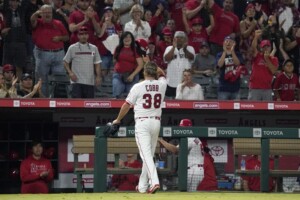 Game 2 : Angels 4, Orioles 1 – Former Oriole, Alex Cobb goes 7 2/3 innings, giving the Angels a much needed boost to their starting rotation as they beat the Orioles for the 2nd straight night, it is also the longest outing by an Angels pitcher since Griffin Canning tossed 8 innings last season & snaps a 5 game streak where an Angels starter went less than 5 innings. Walsh’s infield single in the 1st puts the Angels ahead early & Juan Lagares doubles home a run in the 2nd to add to the lead. O’s starter Jorge Lopez allows 4 runs on 7 hits, strikes out 4 & walks 4, he leads the league in losses. Walsh also scores on a single by Phil Gosselin in the 9th to give the Angels some insurance as they win the series. Baltimore has now lost 2 in a row after sweeping the Astros in Houston. 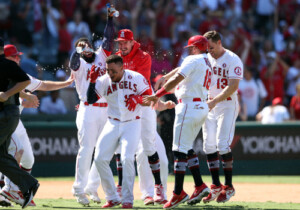 Game 3 : Angels 6, Orioles 5 – The Angels walk it off for the 2nd time in 3 days as they once again take an early lead that includes an Ohtani homer but blow the lead before rallying to win again. David Fletcher doubles & scores on a double by Jared Walsh, who also scores on a single by Phil Gosselin in a 2-run 1st. Ohtani hits a launches a solo shot in the 3rd & the next batter, Anthony Rendon also goes deep as the Angels go back to back to extend the lead. Jose Urias doubles home a run & scores on a 2-run double by DJ Stewart, who scores on a pinch hit single by Mullins that ties the game. Mullins then blasts a solo homer to put the O’s ahead in the 9th but reliever Cole Sulser fails to record an out in the 9th – he walks Jose Iglesias, gives up singles to Kurt Suzuki & Jose Rojas, before Juan Lagares walks it off w/ a 2-run double to send the crowd into a frenzy & give the Angels the sweep.

The Orioles finish their long road trip 4-6, including a sweep of the Astros & will now return home & lick their wounds as they host the Blue Jays, a team they just saw 2 series ago in Buffalo.

Houston, You Have a Problem Breaking Even