Breaking Even – The O’s return home to split a 2-game set w/ the Jays as the 3rd game is rained out & rescheduled as part of a doubleheader on September 11th. 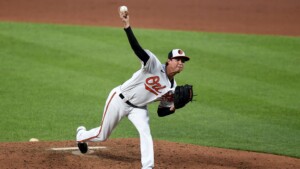 Game 1 : Orioles 7, Blue Jays 5 – Spenser Watkins pitches 5 solid innings in his major league debut & also picks up his 1st career win as he becomes the first Orioles starter to win a game since June 8th. He allows 1 run on 3 hits, strikes out 2 & walks 3 – he gets some support from the bats as the Birds score 5 times in the 5th inning to break the game open against Jays starter Stephen Matz. Cedric Mullins hits a 2-run shot, Trey Mancini scores on a wild pitch & Anthony Santander adds another 2-run blast. Pedro Severino had already hit a 2-run shot in the 4th to give the O’s the lead before the 5-run outburst in the 5th. The Jays homer 3 more times to get back in the game late as Randal Grichuk drills a solo shot in the 7th, Vladimir Guerrero Jr. hits a solo bomb in the 8th & Lourdes Gurriel Jr. hits a 2-run homer in the 9th to cut the lead to 2 but the Jays rally falls short & Baltimore hangs on to snap it’s 3-game losing streak.

Game 2 : Blue Jays 10, Orioles 2 – Toronto hammers out 15 hits as they rout the O’s to even the series, led by Vladimir Guerrero Jr’s 3 singles & 2 runs driven in which push his league leading RBI total to 73. Toronto scores 3 in the 1st on a single by Guerrero Jr. & a fielders choice by Randal Grichuk & an RBI double by Cavan Biggio against O’s starter Matt Harvey, who continues to struggle. Biggio scores on a single by Gurriel Jr., who then scores on a single by Bo Bichette & Guerrero Jr. singles home his 2nd run of the night in a 3-run 4th. Biggio also adds a sacfly in the 5th, he has 2 hits, drives in 2, scores a run. Bichette tacks on a 2-run blast in the 6th, he goes 3-5 w/ 3 RBI & scores twice. Hyun-Jin Ryu allows 1 run on 5 hits in 5 innings of work, he strikes out 7 & walks 2 – he also beats the O’s for the 3rd time since June 20th in the process. Baltimore loses for the 4th time in 5 games since their 3 game sweep of the Astros in Houston.

The O’s break even w/ the Jays & get a day off due to the cancelation of Game 3. They will now host the AL Central leading White Sox for 3 starting Friday night.