Royal Flush : The Orioles take 2 out of 3 in Kansas City to start the 2nd half of the season as they break out the bats & get some timely pitching to take down the Royals. 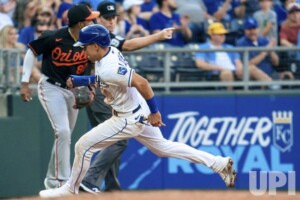 Game 1 : Royals 9, Orioles 2 – Nicky Lopez has 2 hits, drives in 4 runs & scores twice as the Royals build an early lead & cruise to the win behind 4 solid innings from starter Danny Duffy. Duffy allows 1 run on 2 hits, 1 walk & strikes out 3 – also gets some help from the bats, as Lopez singles home 2 & scores on a double by Whit Merrifield, who then scores on a single by Salvador Perez in a 4-run 2nd inning for the Royals. Lopez doubles to drive in 2 more in the 7th & scores on a single by Merrifield to break the game wide open – Merrifield goes 4-5 on the night, he drives in 3. Keegan Akin is shelled for 6 runs on 8 hits in only 3 innings, he walks 3 & strikes out 2. Pedro Severino hits a solo shot in the 8th for Baltimore in the loss.

Game 2 : Orioles 8, Royals 4 – The Orioles score 5 times in the 3rd inning to blow the game open against Royals starter Brady Singer, who is tagged for a career high 7 earned runs on 8 hits in just 3 innings of work. He strikes out 1 & walks 1. The Orioles rack up 6 consecutive hits, as Cedric Mullins doubles, Trey Mancini reaches on an infield single, Ryan Mountcastle singles to score Mullins, DJ Stewart singles to score Mancini, Anthony Santander’s infield single scores Mountcastle & Ramon Urias singles to score Stewart. After Domingo Leyba strikes out, Pedro Severino singles to score Santander & cap the scoring outburst. Mountcastle adds a sacfly in the 4th as the O’s add another & Kansas City scores 3 times in the 5th to cut the lead in half but the Royals would get no more. 7 of the 9 Baltimore starters had at least 1 hit & it was only the club’s 2nd win in the month of July. 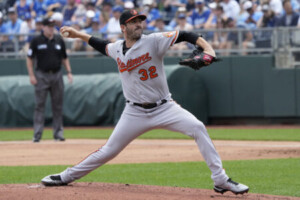 Game 3 : Orioles 5, Royals 0 – Matt Harvey ends his 9 game losing streak w/ his best pitching performance in years, as he goes 6 shutout innings, gives up just 3 hits & walks only 1 while walking 2. Harvey had been winless in his last 12 starts dating back to his last win on May 1st. It’s the first time since September 2018 that he pitched at least 6 innings & didn’t allow a run. Ramon Urias doubles home 2 in the 3rd, he has at least 2 hits in 7 of his last 10 games. Trey Mancini adds an RBI single in the 5th & Austin Wynns doubles home another in the 6th to increase the lead for Harvey & Domingo Leyba scores on an error by 3B Hunter Dozier in the 8th. Carlos Hernandez allows 2 runs on 3 hits in 4 innings of work, he walks 2 & strikes out 6 in just his 2nd career start, Kyle Zimmer, Josh Staumont & Greg Holland each allow 1 run in relief for the Royals. Hunter Dozier ties a career high w/ 4 hits & goes 7-12 in the series for Kansas City.

The O’s win ther first series since a sweep of the Houston Astros at the end of June. They also win for just the 3rd time in the month of July & will now head down to Tampa Bay for 3 against the Rays.