Walk Off Shame : The Orioles drop 2 out of 3 in St. Petersburg as they take Game 1 & drop the finale in heartbreaking fashion as the Rays walk it off to win the series. 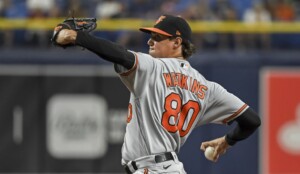 Game 1 : Orioles 6, Rays 1 – Rookie Spenser Watkins allows just 1 run in 6 solid innings & the O’s use a 4-run 6th to pull away & tie their season high of 3 wins in a row. Watkins gives up just 4 hits, strikes out 7 & walks 2 in just his 3rd start & only his 4th career appearance – his ERA also dropping from 1.74 to 1.65. Ryan Mountcastle doubles home a run & Trey Mancini adds a sac fly in a 2-run 1st against Tampa Bay starter Ryan Yarbrough, who allows all 6 runs on 8 hits in 5 2/3, he strikes out 5 & walks 2. Pat Valaika drills a 2-run single & scores on a single by Kelvin Gutierrez, who scores on a ground rule double by Austin Hays to cap the scoring in the 6th. Randy Arozarena’s 2-run double gets the Rays on the board in the 6th but the Orioles bullpen shuts them down the rest of the way. The O’s pick up their 1st win of the season against Tampa Bay, who was 6-0 coming against Baltimore & had been outscored 48-21.

Game 2 : Rays 9, Orioles 3 – Randy Arozarena homers & Francisco Mejia homers & drives in 5 as the Rays blow past the Orioles to even the series. John Means allows a season high 5 runs in his return from a left shoulder strain & departs after 5 innings. He gives up 7 hits, strikes out 2 & walks none. Vidal Brujan singles home a run in the 1st & scores on a sac fly by Wander Franco in the 1st against Means but Pedro Severino singles in a run in the 2nd to get the O’s on the board. Arozarena hits a solo blast in the 3rd, his first HR in the last 22 games & Mejia cranks a 2-run shot in the 4th off of Means as the Rays pull away. Ryan Mountcastle’s sac fly results in an error by RF Brandon Lowe, which scores Austin Hays & Mountcastle scores on Anthony Santander’s double to cut the lead to 2 in the 8th but Mejia drills a bases loaded triple to clear the bases & then scores on a single by Ji-Man Cho to break it wide open. Baltimore goes 1-11 w/ men in scoring position on the night. 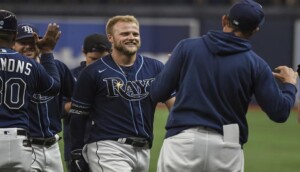 Game 3 : Rays 5, Orioles 4 – Austin Meadows hits a 2-out, 2-run walk off single as the Rays rally against the Baltimore bullpen to beat the O’s & take the series @ home. Austin Hays doubles home a run in the 1st to give the O’s the early lead against Rays starter Michael Wacha but Randy Arozarena hits a solo shot in the 1st & Joey Wendle triples home a run in the 2nd to give the Rays the lead. Pat Valaika & Ryan Mountcastle and each hit solo shots in the 3rd & 4th innings as the O’s take the lead back but Arozarena goes deep again, blasting a solo shot to tie it again in the 5th. Mountcastle singles home the go ahead run in the 6th but the Rays load the bases in the 9th against reliever Tanner Scott on 2 singles & a walk before Meadows hits a 2-out, 2-strike single to drive in 2 as the Rays walk it off & the O’s lose a heartbreaker. Tampa Bay wins for the 10th time in 13 games, while the O’s end their 6 game road trip 3-3.

The Orioles finish up their 6-game road trip @ .500 despite having the chance to have a winning trip after taking 2 out of 3 in Kansas City. They now return home to host Washington in the battle of the Beltways.