Plowing Their Ray Through

Plowing Thier Ray Through : The Rays sweep the O’s again, running their mark to 11-1 on the season against Baltimore as Tampa Bay continues to climb towards the best record in the American League. 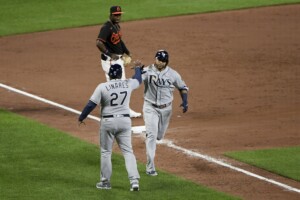 Game 1 : Rays 10, Orioles 6 – Nelson Cruz homers & drives in 5, Wander Franco also drives in 2 as the Rays take the opener. Ryan Mountcastle singles home a run in the 1st for the O’s but the Rays score 2 in the 2nd on an error by O’s starter John Means to take the lead in the 2nd. Means goes 5 innings, allows only 2 runs, but just 1 earned, on 8 hits, strikes out 5 & walks 1, but it’s the bullpen that caves in after he departs. After Pedro Severino hits a solo shot & Richie Martin doubles home another run to give the O’s the lead in 2nd, Austin Hays hits a solo shot in the 3rd & newcomer Jorge Mateo triples home another to give the O’s a 3-run lead in the 5th but they would never score again. Cruz hits a 3-run blast to tie it in the 6th & doubles home 2 more to put Tampa Bay ahead for good, Wander Franco singles home 2 more & scores on a single by Manuel Margot in a 4-run 8th as the Rays pull away. Baltimore has now lost 3 in a row, while Tampa Bay has won 6 of 8. 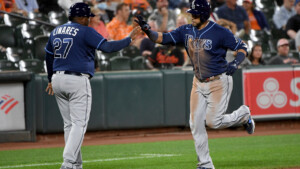 Game 2 : Rays 12, Orioles 3 – Brandon Lowe hits a Grand Slam & Nelson Cruz homers for the 2nd straight night as the Rays beat the O’s, who continue to be dominated by their AL East rival. Yandy Diaz hits a solo homer in the 1st but Jorge Mateo scores on C Mike Zunino’s throwing error on an attempted steal of 3rd & Cedric Mullins drills 2-run blast in the 3rd to put the Orioles ahead until Nelson Cruz launches a 3-run shot in the 5th to put the Rays ahead for good & they would keep adding to their lead. O’s starter Spenser Watkins goes 6 innings, but allows 5 runs, 4 earned, on 8 hits, strikes out 4 & walks none. Phillips doubles home a run in the 6th & Lowe breaks the game wide open w/ his 2nd Grand Slam of the season w/ a long drive off the foul pole in left, also walks in the 9th for his 5th RBI of the night. The Birds have given up at least 10 runs in 4 straight games & have given up double-digits in runs over 4 successive teams since moving to Baltimore in 1954. Baltimore falls to 1-10 against Tampa Bay this season.

Game 3 : Rays 9, Orioles 6 – Brett Phillips caps off his first career 2 HR game as the Rays rally to shock the O’s & finish off the sweep @ Camden Yards. Cedric Mullins hits a solo shot in the 1st, becoming the 7th Oriole to reach the 20/20 club & Richie Martin singles home a run in the 2nd as the O’s build an early lead against Rays starter Michael Wacha who gets pounded for 5 runs on 10 hits in just 5 innings, he strikes out 2 & walks 1. Anthony Santander drills a solo shot in the 3rd & Austin Hays provides an RBI single in the 4th. Austin Meadows & Brett Phillips each hit solo shots in the 4th & 7th, Wander Franco walks w/ the bases loaded to force in a run, Yandy Diaz adds a sac fly & Phillips caps the uprising in a 6-run 8th inning to blow it open against the O’s bullpen after starter Jorge Lopez was solid for 6 innings of work, striking out 5 & walking 2, allowing just 2 runs on 4 hits. Tampa Bay is now 11-1 on the season against Baltimore, who has now lost 5 straight.

The Orioles have hit a rough patch after coming out of the gate hot n the 2nd half. They remain home to host Detroit, who they just played in a 4-game series in Motown over a week ago. This team is just levels below the teams that they are facing right now.