Tiger Style : After picking up a split in Detroit, the O’s are not so lucky the 2nd time around, getting swept by the Tigers to run their losing streak to 8 games in a row. 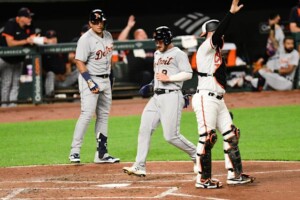 Game 1 : Tigers 9, Orioles 4 – Willi Castro doubles, triples & drives in 3 to lead the way for the Tigers as they take the series opener. After an hour & 54 minute rain delay, the Tigers jump on O’s starter Keegan Akin right away – Castro doubles home a run & scores on a triple by Akil Badoo in the 1st to put the Tigers on top for good. Former Oriole, Jonathan Schoop doubles home a run & scores on a single by Niko Goodrum, who scores on the 2-run triple by Castro in a 4-run 3rd. Akin goes only 3 innings, allows 6 runs, on 7 hits, strikes out 5 & walks 1 in just 3 innings of work. Anthony Santander hits solo homers in the 2nd & in 4th for the O’s & DJ Stewart adds another solo blast in the 4th against Tigers starter Casey Mize, who goes just 4 1/3, gives up 4 runs on 5 hits, strikes out 4 & walks 1. The Detroit bullpen does the rest as 5 relievers pitch 4 2/3 scoreless innings & Jaimer Candelario finally puts game away w/ a 2-run shot in the 8th. Baltimore has lost 6 games in a row & has allowed at least 9 runs in all of them, they are the first team since 2002 to do that. 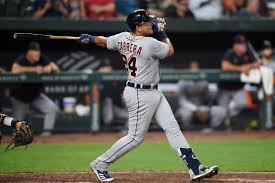 Game 2 : Tigers 5, Orioles 2 – Miguel Cabrera homers to move within 1 HR of 500 in his career, has 3 hits & drives in 2 as the Tigers extend the Orioles losing streak to 7 in a row. Cabrera drills a solo blast (#499) of his career to put the Tigers ahead early & Niko Goodrum doubles home 2 in the 5th to add to the lead against Orioles starter Matt Harvey, who allows just 3 runs on on 8 hits, strikes out 5 & walks 3. Cabrera adds a sac fly in & Jonathan Schoop scores on a wild pitch by O’s reliever Dustin Knight in the 6th to add to the Detroit lead. Tigers starter Tarik Skubal has his 2nd straight scoreless outing, as he gives up just 5 hits, strikes out 6 & walks 1 in 6 innings of work. Anthony Santander hits a 2-run shot in the 8th but the Orioles can get no closer. Cedric Mullins extends his hit streak to 18 games in a row w/ an infield single in 3rd – this game was delayed 1 hour & 11 minutes a night after the opener of the series was delayed nearly 2 hours. Baltimore allows only 5 runs to snap a streak of allowing at least 9 runs in 6 games in a row, falling 1 game short of tying a Major League record w/ 7, last set by Seattle in 2000. 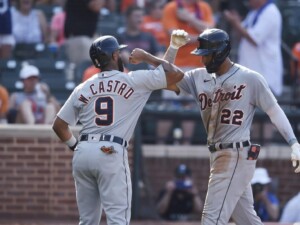 Game 3 : Tigers 6, Orioles 4 – John Means is rocked for 6 runs in just 4+ innings as the Tigers use the longball to sweep the Orioles in the matinee finale. Cedric Mullins extends his hitting streak to 19 games in a row & then steals home in the 1st against Tigers starter Matt Manning to put the Birds ahead early but Means can’t hold it as the Tigers get to him for 5 runs in the 4th – Jaimer Candelario doubles home a run & scores on a 2-run homer by former Oriole, Renato Nunez in his return to Baltimore & Victor Reyes drills another 2-run shot for the 2nd homer of the inning off of Means, who allows 6 runs on 8 hits, strikes out 3 & walks 1 in 4 1/3 innings, Robbie Grossman hits a solo shot in the 5th that finally knocks him out of the the game. DJ Stewart homers in consecutive at bats, going deep in the 4th & the 6th innings for the O’s to try to get them back in the game but the rally falls short & the Tigers complete the sweep. Baltimore has now lost 8 in a row & is in a freefall after a string start the 2nd half.

Detroit moves percentage points ahead of Cleveland in the NL Central w/ the sweep of the O’s, who will now hit the road for 6 games in Boston & Tampa Bay as they look to snap their losing streak & get back in the win column.

Plowing Their Ray Through Playing Dead