Playing Dead : The Orioles are swept by the Red Sox to extend their losing streak to 11 in a row, they continue to be outplayed in almost every aspect as they try to navigate this gauntlet of a remaining schedule. 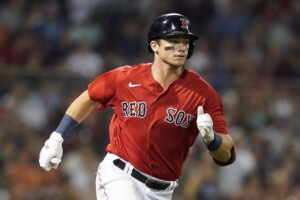 Game 1 : Red Sox 8, Orioles 1 – Kyle Schwarber scores twice in his Red Sox debut & the Red Sox homer 3 times to take the opener behind a solid outing from starter Nick Pivetta as they look to rebound from being knocked down 5 games in the AL East. Jarren Duran singles home a run & scores on a sac fly by Kike Hernandez, after Bobby Dalbec drives in 2 on a double in a 4-run 2nd inning where the Red Sox send 8 men to the plate against O’s starter Spenser Watkins. Watkins allows 6 runs on 7 hits in just 4 innings of work, he strikes out 1 & walks 3. Richie Martin curves a solo shot around the foul pole in right to get the O’s on the board in the 3rd against Pivetta but Duran singles home Schwarber to add to the lead in the bottom of the inning. Pivetta goes 6 strong, allowing just 1 run on 3 hits, he strikes out 8 & walks 2. Xander Bogaerts drills a solo homer in the 4th, Bobby Dalbec hits one in the 6th & Hunter Renfroe adds another in the 7th. Baltimore extends it’s losing streak 9 in a row. 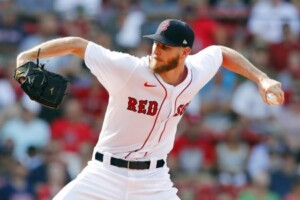 Game 2 : Red Sox 16, Orioles 2 – Chris Sale goes 5 innings to earn the win in his first major league appearance in 2 years & the Red Sox homer 5 times as they destroy the O’s to take the series @ home. Rafael Devers drives in 4 on the day, including a 3-run shot in the 1st to get the Red Sox started & in a 4-run 1st against O’s starter Jorge Lopez & Alex Verdugo singles home a run, then scores on a double by Xander Bogaerts in the 2nd. Jarred Duran triples home a run & scores on a 2-run blast by Bobby Dalbec, Bogaerts singles home another & scores on a 3-run bomb by J.D. Martinez to cap a 7-run 5th inning for Boston. Dalbec adds a solo shot in the 6th & Hunter Renfroe drills a solo shot off of Baltimore C Austin Wynns in the 8th to complete the onslaught. Lopez allows 7 runs on 9 hits in just 3 1/3 innings, he strikes out 1 & walks 2, his day gets cut short in the 4th. Sale tosses 5 innings, allows 2 runs on 6 hits, strikes out 8 & walks 2 – he gives up solo homers to Austin Hays & Trey Mancini in the 3rd but doesn’t allow another run. Boston’s first 4 hitters went 11-11 w/ 7 RBI & 8 runs scored before making an out. Baltimore has now lost 10 in a row.

Game 3 : Red Sox 6, Orioles 2 – Former Oriole, Eduardo Rodriguez pitches 6 solid innings, J.D. Martinez homers & the Red Sox complete the sweep of the Orioles, as Baltimore continues to slide towards the worst record in the league. Martinez drills a 3-run shot in the 1st to give Rodriguez some early run support & the lefty does the rest, going 6 innings & allowing only 1 run on 3 hits, he strikes out 6 & walks 3. Kike Hernandez’s infield single adds another run, O’s reliever Fernando Abad walks Hunter Renfroe w/ the bases loaded to force home another & Xander Bogaerts’ infield single provides another Boston run. O’s starter Keegan Akin gives up 3 runs (all in the 1st) on 6 hits in 4 innings, he strikes out 2 & walks 3. Jorge Mateo hits an RBI single in the 7th for the Orioles but the Birds cannot get any closer. Boston has won 4 out of 5 after losing 10 out of 12. Baltimore has been outscored 104-34 during their 2nd longest losing streak of the season which now extends to 11 games in a row.

The Orioles continue to slide out of control & it won’t get any easier, they will now travel to Tampa for 4 to play a Rays team that has completely owned them this season & already riding an 11 game losing streak.