Chopped Up : The Orioles losing streak continues as they are swept by the Braves @ home, extending their skid to 18 games in a row & counting.

Game 1 : Braves 3, Orioles 0 – Travis D’Arnaud celebrates a new contract w/ a 2-run homer, Max Fried pitches a complete game & the Braves take the opener in Baltimore. Fried allows just 4 hits in his first career 9 inning complete game, striking out 4 & walking none & D’Arnaud’s 2-run shot in the 2nd gives the Braves the lead & Jorge Soler hits a solo shot in the 3rd to give Fried him all the run support he would need. Fried is 4-0 in August w/ a .067 ERA. O’s starter Keegan Akin goes 5 innings, allowing 3 runs on 5 hits, he walks 3 & strikes out 3 in the loss. Ryan Mountcastle extends his career-high hitting streak to 12 games w/ a single in the 1st.
Atlanta matches a modern-era, single-season franchise record w/ their 11th consecutive road win, last accomplishing that feat while in Milwaukee in 1956. The Orioles have been outscored 141-42 during their current losing streak & they have the worst record in the majors. 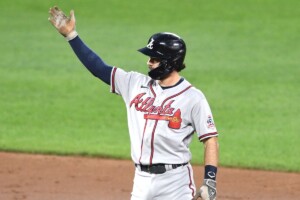 Game 2 : Braves 5, Orioles 4 – Austin Riley puts the Braves ahead for good on a homer in the 5th as Atlanta stretches it’s winning streak to 8 games in a row & extends Baltimore’s losing streak to 17 in a row.
Ryan Mountcastle hits a solo shot in the 1st to extend his hitting streak to a career-high 13 games in a row but Dansby Swanson’s 2-run double in the 3rd puts the Braves ahead against O’s starter Matt Harvey, who goes 5 1/3 innings, allowing 4 runs on 7 hits, strikes out 5 & walks 1.
Joc Pederson drills a solo shot in the 4th but Anthony Santander & Ramon Urias hit back to back jacks in the 4th to tie it before Riley puts Atlanta ahead for good in the 5th. Soler adds a sac fly in the 9th to give the Braves an insurance run that they would end up needing as Santander goes deep for the 2nd time on the night to cut the lead to 1 but the Birds can get no closer. Atlanta has won 15 of 17 to take over 1st place in the NL East & has now won 12 straight road games, a single-season franchise record & the longest run in the majors since Cleveland won 14 in a row in 2017. Baltimore has now lost 17 in a row & will look to avoid the sweep in the finale on Sunday. 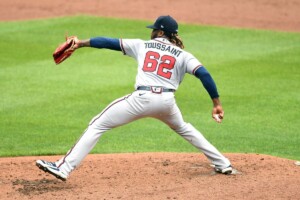 Game 3 : Braves 3, Orioles 1 – The Braves keep winning while the Orioles keep losing. Atlanta extends it’s winning streak to 9 on a row while the O’s losing streak extends to double that many. Touki Toussaint tosses 5 1/ 3 innings of 1 run ball, as he scatters 5 hits, also strikes out 5 & walks 1 to help Atlanta extend it’s winning ways. Jorge Soler drills a solo shot, his 2nd HR of the series & Adam Duvall adds a 2-run double in a 3-run Atlanta 4th to give Toussaint some run support but Ramon Urias doubles home a run in the bottom of the inning to get a run back for the Birds. O’s starter John Means goes 6 innings, allowing 3 runs on 4 hits, strikes out 5 & walks 2 but takes hard luck loss & is stilling search of his 6th win. The O’s use 3 relievers, the Braves use 5, including Will Smith, who closes it out in the 9th.
Atlanta wraps up a 9-0 road trip & has won a franchise record 13 straight & 16 of it’s last 18. Baltimore has lost 18 in a row, the longest streak in the majors since Kansas City lost 19 in a row in 2005.

The O’s will look to snap the skid against the Angels, who come to town after a day off on Monday. Baltimore will then host Tampa Bay for 3 more.