Angel Eyes : The Orioles snap their 19 game skid & avoid being on the wrong side if history, taking 2 out of 3 from the L.A. Angels.

Game 1 : Angels 14, Orioles 8 – The Angels extend the Birds losing streak to 18 games as they score 5 times in the 2nd & 4th innings in a blow out win & run their record to 4-0 on the season against the O’s on the season. Brandon Marsh singles home a run & scores on a triple by Jo Adell, who scores on a 2-run shot by Juan Lagares to give L.A. a 4-run lead in the 2nd. Jose Iglesias doubles home a run & scores on a 2-run single by Adell in the 3rd & singles home another in the 4th. Max Stassi adds an RBI double & Marsh adds a single that score Iglesias & scores on a single by Lagares. David Fletcher singles home another to cap the scoring in the 5-run 4th inning & blow the game wide open. The O’s get 3 back in the 5th as Anthony Santander doubles home a run & scores on a 2-run single by Ramon Urias to cut into the lead, Ryan Mountcastle hits his 2nd solo homer of the game & Santander adds a 2-run blast in a 3-run 6th to cut the lead to 5, he goes 3-4 w/ 3 RBI – but the rally would stop there for the O’s. Baltimore has been outscored 163-55 during their 19 game losing streak & is winless since August 2nd, they are just 2 losses short of matching the franchise record 21 losses in a row. 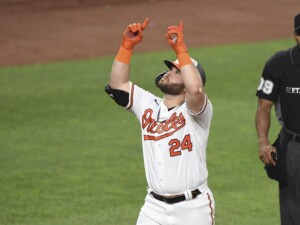 Game 2 : Orioles 10, Angels 6 – The losing streak is over as the Orioles snap the 19 game skid in come back fashion to take down the Angels & put an end to historic futility. Cedric Mullins & Anthony Santander each hit solo blasts in the 1st against Angels starter & All-Star Shohei Ohtani to give the O’s the early lead but Brandon Marsh’s 2-run single ties it in the 2nd. Jared Walsh hits a solo homer to put the Angels on top & Marsh connects on his 1st career HR w/ a 3-run shot to increase the lead in a 4-run 4th inning. That’s when the O’s mount their furious rally – DJ Stewart hits a 2-run shot in the 4th, Ramon Urias & Kelvin Gutierrez both walk w/ the bases loaded to give the O’s the lead, Austin Hays adds a 2-run, bases loaded double & Mullins’ sacfly caps the scoring in a 5-run 8th to complete the rally. Ohtani goes 5 innings, allows 4 runs on 5 hits, strikes out 7 & walks none – he also allows 3 longballs & strikes out 3 times at the plate. He earns a no decision as he leaves in the 6th & the Angels bullpen isn’t able to hold the lead. Baltimore gets back in the win column for the first time since August 2nd & will now look to win the series tommorow.

Game 3 : Orioles 13, Angels 1 – After ending their 19 game losing streak the night before, the Orioles make it 2 in a row, taking out some frustration on the Angels pitchers & starting a winning streak this time. After Shohei Ohtani hits a solo shot in the 1st to Los Angeles ahead, Kelvin Gutierrez singles home a run in the 3rd to tie it & the floodgates would open from there – the Birds then score 5 times in the 5th, as Trey Mancini singles home a run, DJ Stewart doubles in another & Pedro Severino caps the explosion w/ a Grand Slam to blow the game wide open, the 2nd if his career & the 3rd on the season for the Orioles. O’s starter Keegan Akin allows only 1 run on 3 hits in 7 innings, he strikes out 6 & walks 2 to pick up his 1st win of the season & just the 2nd of his career. Ramon Urias singles home a run in the 7th & the O’s bust loose for their 2nd 5-run inning of the day as they score times more times in the 8th. Mountcastle delivers a 2-run single, Urias doubles home another & scores on a 2-run single by Severino, who drives in a career-high 6 runs on the day. Los Angeles has lost 5 of their last 6, while Baltimore has won for the 2nd game in a row after their 19 game losing streak, their first wins in a row since July 30-31 & wins their first series since a 3-game sweep of Washington from July 23-25.

Now that the losing streak is over, the O’s can back to just playing Baseball again but it won’t get any easier as they will now host Tampa Bay for 3, whom they have only beaten once this season & then head to Toronto for 3.