Same Old Story – The Rays sweep the O’s to run their record to 18-1 on the season against Baltimore & extend their lead in the AL East as well in the process. 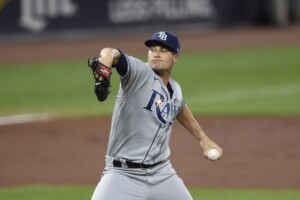 Game 1 : Rays 6, Orioles 3 – Shane McClanahan wins his 5th start in a row, Mike Zunino hits a 3-run blast & the Rays beat the Orioles again, also setting the team record for wins in a season against a single opponent. McClanahan tosses 6 innings, allowing 2 runs on 8 hits, strikes out 4 & walks none to earn move to 4-0 on the season against the O’s. Yandy Diaz singles home a run & scores on a 2-run single by Manuel Margot in a 3 run Tampa Bay 1st against O’s starter Matt Harvey, who retires 16 in a row after that. Austin Hays drills a 2-run shot in the 4th to cut the lead to 1 but Zunino’s 3-run blast in the 7th opens the lead to 4. Chris Mazza works 3 innings of relief to record his first save but does allow a solo homer to Cedric Mullins in the 9th. The Rays tie a major-league record that it already co-owns w/ 12 pitchers earning a save in the same season. Tampa Bay has now won 6 in a row & continues to peak. Baltimore loses for the 19th time in their last 21 games. 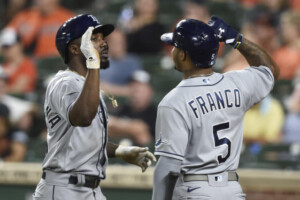 Game 2 : Rays 4, Orioles 3 – Randy Arozarena hits a good ahead 2-run blast in the 8th to put Tampa Bay on top late as the Rays beat the O’s again to extend their winning streak to 7 in a row & 11 in a row against Baltimore. Ryan Mountcastle hits a sac fly in the 5th to break a scoreless tie, Pedro Severino doubles home a run & Jorge Mateo singles home another in a 2-run 6th inning to add to the lead. O’s starter John Means goes 6 1/3 innings, allows just 2 runs on 5 hits, strikes out 5 & walks none as he keeps the Rays bats in check for most of the game, leaving in the 7th w/ the lead. The O’s bullpen cannot hold that lead though, as Joey Wendle doubles home a run in a 2-run 7th & Arozarena hits a 2-run blast in the 8th that gives the Rays the lead for good, giving them their 10th comeback win against the Orioles this season. Tampa Bay has also outscored Baltimore 51-12 in the 7th inning or later & 38-6 @ Camden Yards. Tampa Bay continues to sit a atop the AL East, thanks in part to a now 17-1 against the Birds & has won 7 in a row. Baltimore has now lost 20 of their last 22.

Game 3 : Rays 12, Orioles 8 – Joey Wendle homers twice, including a Grand Slam & drives in 6 as the Rays complete the sweep & nearly complete a season sweep of the O’s as they finish up 18-1 against Baltimore on the season. Randy Arozarena singles home a run & scores on a single by Joey Wendle in a 2-run 1st for Tampa Bay. Austin Hays singles home a run & the 1st to get the Orioles on the board in the bottom of the inning but Jordan Luplow drills a solo blast in the 2nd for the Rays & Ryan Mountcastle hits a solo blast in the 3rd, he ties a career-high w/ 4 hits as the Birds would try to keep pace but Austin Meadows hits a 2-run blast & Joey Wendle adds a solo shot in the 6th as the Rays begin to pull away. Jorge Mateo hits a solo shot in the 6th for the Orioles but Wendle’s Grand Slam in the 7th puts the game away & Wander Franco adds 2 more on an RBI single in the 8th, he has reached base in 29 straight games – the longest active streak in the majors. Cedric Mullins connects on a 2-run homer in the 9th but the Birds cannot get any closer. Tampa Bay defeats Baltimore for the 12th straight time, tying a record they set in 2008 & has scored 10 or more runs against Baltimore 6 times.

The Orioles will now head to Toronto for 3 as they go to Canada for the 1st time this season, after playing the Blue Jays in Buffalo before the Canadian Border re-opened.

Angel Eyes For The Birds