For The Birds : The O’s manage to salvage a game in Toronto to avoid another sweep but still lose the series to a Blue Jays team trying to stay alive in the Wild Card chase. 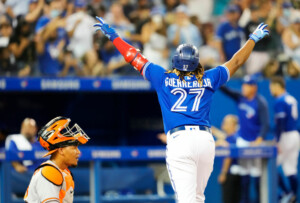 Game 1 : Blue Jays 7, Orioles 3 – Vladimir Guerrero Jr. homers twice to increase his total to 38 & Robbie Ray goes 7 innings to earn the win for the first time in his last 6 starts as the Jays take Game 1 to extend their winning streak to 3 in a row. Ray allows 2 runs on 4 hits, strikes out 10 & walks only 1 to earn his first non-split decision in his last 5 outings. Ryan Mountcastle hits a solo shot in the 1st to give the O’s the early lead but Guerrero Jr. ties it on his first homer of the game, a solo blast in the 4th. The O’s led 2-1 when the Jays score 6 times in the 6th to take the lead for good. Bo Bichette singles home a run & scores on a 2-run double by Teoscar Hernandez, Guerrero drills a 3-run bomb in the 7th, his 2nd of the night to give Toronto a comfortable advantage, it’s the 7th multi-homer game of his career & the 5th of the season. Pedro Severino singles home a run in the 9th for the O’s & Mountcastle drives in 2 on the night in the loss. Baltimore slips to 3-24 now in the most of August. 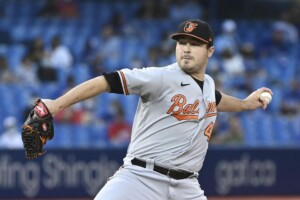 Game 2 : Orioles 4, Blue Jays 2 – Keegan Akin allows just 1 run over 5 innings & wins consecutive starts for the first time as the O’s win for the 3rd time in their last 7 games since snapping a 19 game losing streak. Akin gives up 2 hits, strikes out 5 & walks 3 to win for the 2nd time in a row & the bats give him enough run support despite being No-Hit by Jays starter Hyun-Jin Ryu for the first 5 innings. Danny Jansen hits a solo shot in the 3rd to put Toronto ahead against Akin but the O’s crack the hit column & chase Ryu in the 6th as Austin Hays singles home Ryan Mountcastle & then scores on a 2-run double by Ramon Urias. Ryu allows 3 runs on 3 hits in 5 2/3 innings, he strikes out 6 & walks 3 – losing for the first time in 7 career games against the O’s. Guerrero Jr. tees off for the 3rd time in 2 days as he drills a solo blast in the 6th to cut the lead to 1 but the O’s bullpen holds on as Jorge Lopez, Tyler Wells & Cole Sulser combine for 4 scoreless innings of relief to seal the victory. Jahmai Jones delivers an RBI single to add a huge insurance run in the 7th. Toronto has scored 3 runs or less in 10 of it’s last 12 games despite riding a 3 game winning streak coming into this game. Baltimore finishes 4-24 in the month of August & will look to win the series in the finale. 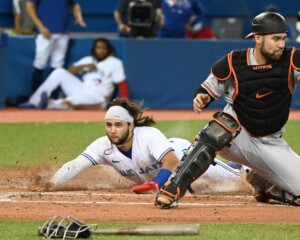 Game 3 : Blue Jays 5, Orioles 4 – Randal Grichuk hits a sac fly to put the Blue Jays ahead late as Toronto wins the series @ home against the O’s. Marcus Semien’s solo homer in the 1st to put the Jays ahead, Cedric Mullins & Ryan Mountcastle both walk w/ the bases loaded against Toronto starter Stephen Matz, who allows 2 runs on 5 hits in 5 innings, he strikes out 5 & ties a season high w/ 4 walks. Teoscar Hernandez singles to tie the game & scores on a 2-run single by Lourdes Gurriel Jr. in a 3-run Toronto 4th. O’s starter Matt Harvey gives up 4 runs on 6 hits in innings, walks 1& fails to strike a batter for the first time in 27 starts all season & just the 2nd time in his career. Austin Wynns singles in a run in the 6th & Trey Mancini doubles home the tying run in the 7th for the O’s but Grichuk’s sac fly gives the Blue Jays the lead for good & Jordan Romano closes it out for the 2nd time in the series.
Toronto scores more than 3 runs for 3rd time in their last 13 games & has now won 5 of 6 is 4.5 games behind Boston for the 2nd AL Wild Card spot. Baltimore is 3-5 in their last 8 games.

The O’s are playing just below .500 Baseball since snapping their 19 game losing streak, they will now have the day off before heading to New York to play the Yankees for 3 as the final month of the season is here.