New York State Of Mind : The Orioles go into New York & take 2 out of 3 from a Yankees team that was desperately trying to keep alive in the AL Wild Card race as they continue to play their spoiler role for the rest of the season. 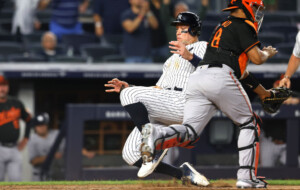 Game 1 :Yankees 4, Orioles 3 (11 innings) – Giancarlo Stanton homers & singles in the game winning run in the 11th inning as the Yankees beat the O’s to win for the 15th time in their last 19 games. O’s starter John Means allows only 2 runs on 3 hits in 5 innings, he strikes out 5 & walks 2, earning a no decision. Stanton hits a solo blast in the 4th & D.J. LeMahieu adds a sacfly in the 5th to extend the lead for New York but Trey Mancini hits a solo shot in the 6th & Jorge Mateo adds another in the 7th to tie the game. Nestor Cortes pitches 5 2/3 innings, allowing 1 run on 4 hits, he strikes out 7 & walks 2, keeping the Baltimore bats in check all night. Ryan Mountcastle gives the O’s the lead in the 10th on an RBI single but LeMahieu ties it again w/ a single in the bottom of the inning & Stanton walks it off w/ a single in the 11th. Both teams combine to use 12 pitchers as each team uses 6 each in relief but the Orioles bullpen gives in first in the 11th. Baltimore has lost 6 of their last 7. 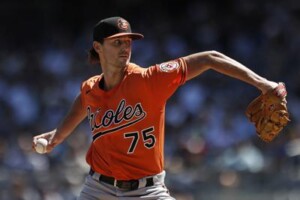 Game 2 : Orioles 4, Yankees 3 – The O’s get back in the win column w/ some strong pitching & timely hitting as they rebound to beat the Yankees behind 5 No-Hit innings from starter Chris Ellis. Yankees starter Jordan Montgomery walks Jorge Mateo w/ the bases loaded in the 2nd to give the O’s the early lead & Ellis makes it stand up all the way to the 5th before departing, he strikes out 3 & walks 2, also throws 2 wild pitches on the day & Cedric Mullins doubles home a run & scores on an infield single by Austin Hays in a 2-run Baltimore 7th. Gleyber Torres reaches on an infield single that scores Anthony Rizzo in the bottom of the inning & Joey Gallo hits a 2-run bomb to tie the game in the 8th to snap an 0-17 skid & send Yankee stadium into a frenzy. Closer Arnold’s Chapman comes on the 9th & allows the go ahead sac fly to Pedro Severino as the O’s take the lead back for good & spoil the Yankees comeback hopes. Cole Sulser records the last 4 outs to close it & out in the 9th for the O’s. New York had won 15 out of 19 but they now cling to a 1.5 game lead over Boston in the AL Wild Card race. Baltimore records it’s 2nd win in their last 8 games. 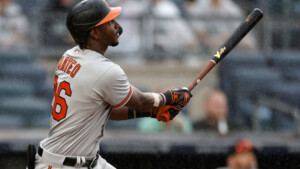 Game 3 : Orioles 8, Yankees 7 – Gary Sanchez homers twice, including a Grand Slam & drives in 6 runs but it’s still not enough as the Orioles rally to beat the Yankees & win their first series in New York since 2019. Austin Hays hits a solo shot in the 2nd to get the O’s on the board, but Sanchez smashes a Grand Slam to put New York up by 3 in the bottom of the inning. Anthony Rizzo singles home a run in the 5th for the Yankees, but Cedric Mullins hits a 2-run in the 6th to become the 3rd 25/25 man in Orioles history. Sanchez hits his 2nd blast of the day in the bottom of the 6th, but the O’s rally for 4 in the 7th to take the lead for good. Jahmai Jones delivers a 2-run double, Jorge Mateo singles home another run & Kelvin Gutierrez provides the go ahead single to score Jones & put the O’s ahead, then the bullpen tosses 3 scoreless frames to lock it down, including a 1-2-3 9th inning by Tyler Wells to record his first career save. New York drops to 9-7 against Baltimore this season. Following a 13-game winning streak, the Yankees lose for the 6th time in 8 their last games & is now 49-29 in 1 run games on the season. Baltimore has now won back to back games, but only 3 of their last 9.

Baltimore will now return home to host Kansas City for 4 games starting w/ a matinee on Labor Day as they look to keep up their good play of late & finish the final month of the season on a high note.

For The Birds A Royal Pain