A Royal Pain : The O’s split a 4 game series w/ the Royals as they continue to play hard down the stretch despite a rough season, including an unbelievable 8th inning rally in Game 3. 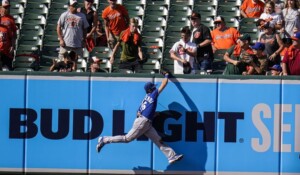 Game 1 : Royals 3, Orioles 2 – Andrew Benintendi hits a go ahead single in the 8th & reaches above the left field wall to take away a game tying homerun in the 9th as the Royals take the opener to win for the first time @ Camden Yards since August 2019. Austin Hays singles home a run in the 3rd to put the Orioles ahead & increase his hitting streak to a career high 13 games but former Oriole Hanser Alberto drills a solo shot in the 5th to tie it for Kansas City. Cedric Mullins puts the Birds back on top w/ a solo homer in the bottom of the 5th, his 2nd in as many days, as he inches closer to the 30/30 mark but Salvador Perez singles home a run on a blooper to tie it in the 8th & scores on the go ahead single by Benintendi. Anthony Santander leads off the 9th w/ an apparent game tying homer but Benintendi robs him at the left field wall w/ a leaping grab. O’s starter Zack Lowther allows 1 run on 3 hits, strikes out 2 & walks 2 over 6 innings in just his 2nd major-league start. Baltimore is now 1-79 when trailing after 8 innings this season.

Game 2 : Orioles 7, Royals 3 – Cedric Mullins homers for the 3rd consecutive game, DJ Stewart & Austin Hays join him as the O’s homer 3 times & Michael Baumann picks up his first career win in his major-league debut as the O’s beat the Royals. Anthony Santander drives in a run on an RBI single & scores on a 2-run blast by DJ Stewart in a 4-run Orioles 1st & Hays adds a solo shot in the 3rd to extend his hitting streak to a career high 14 games as the O’s get to Royals starter Jackson Kowar for 6 runs on 5 hits in 6 innings, Kowar strikes out 7 & walks 3. Carlos Santana hits a solo blast in the 4th to cut the lead to 4 but Mullins drills his 3rd homer in as many games as he continues to chase the 30/30 club, drilling a solo shot in the 7th. Orioles starter, Alexander Wells goes 4 innings, allowing 2 runs on 5 hits, walks 2 & strikes out 2 & Baumann relieves him in the 5th & works 3 2/3 innings, allowing 1 run on 2 hits, strikes out 1 & walks 1 & retires the 11 of the last 14 batters he faces. Kansas City is now 9-4 in their last 13 road games after going 19-37 in their first 56. 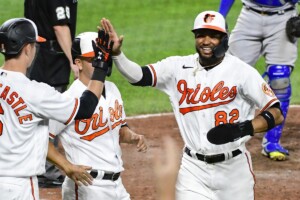 Game 3 : Orioles 9, Royals 8 – The Orioles rally from a 5-0 deficit, as they explode for 9 runs in the 8th to beat the Royals in dramatic comeback fashion. Andrew Benintendi singles home a run in the 1st, Whit Merrifield scores on an error by C Pedro Severino in the 3rd & Nicky Lopez doubles home another run in a 2-run 5th. Salvador Perez hits a solo shot in the 7th to increase the lead but the Orioles put up a furious rally in the 8th as Austin Hays doubles in a run as he extends his hitting streak to 15 games, Anthony Santander singles home another, Ramon Urias singles to score Hays, Kelvin Gutierrez drives home 2 more on another single & 2 more runs score on a dropped pop fly by RF Hunter Dozier as the O’s take the lead for good & Ryan Mountcastle drills a 2-run bomb to cap the scoring outburst. Benintendi launches a 3-run blast to cut the lead to 1 – his 3rd hit in the 9th (he drives in 5 on the night) but Dillon Tate is relieved by Tyler Wells, who records the final out for his 2nd save. Kansas City has not won a series in Baltimore since 2014, Baltimore matches it’s largest comeback of the season, joining an 8-7 win against Miami on July 28th.

Game 4 : Royals 6, Orioles 0 : Carlos Hernandez delivers another brilliant outing as the Royals win to earn the split in the series & close the game out without incident this time. Hernandez allows 3 hits in just 6 shutout innings, he walks 3 & strikes out 1, he has allowed only 3 runs over his last 24 2/3 innings, over his past 4 appearances. Since July 29th he is 5-0 w/ a 1.68 ERA. O’s starter John Means allows 2 runs on 5 hits, he strikes out 5 & walks 2- Nicky Lopez drills a solo shot in the 1st & singles home another run in a 3-run 8th as the Royals pull away late. Andrew Benintendi singles home a run, his 6th RBI in the last 2 nights & Carlos Santana brings home another run on a groundball to 3rd. Hunter Dozier blasts a 2-run shot in the 9th to add 2 more for Kansas City & the bullpen closes it out this time, unlike the night before. Domingo Tapia works 2 innings of relief & Scott Barlow wraps it up in the 9th as the bullpen combines for 3 hitless innings. Kansas City wins for just the 5th time in the last 19 games in Baltimore.

The O’s split the 4 game set @ home & will host Toronto for 4 more, including a double header on Saturday as the Blue Jays come in Red Hot & look to remain in the hunt in the AL Wild Card chase.