Pecking Order : The Orioles lose 3 out of 4 to the Blue Jays, getting outscored 47-25 in the series, including a bloodbath of a blowout in the finale as Toronto continues to surge towards an AL Wild Card spot. 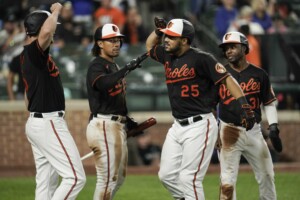 Game 1 : Orioles 6, Blue Jays 3 – Cedric Mullins hits a solo shot, Austin Hays triples to extend his hitting streak to a career-high 16 games & Ryan McKenna blasts a 2-run shot off of Jays starter Robbie Ray in the 1st inning to get the O’s on the board early & give starter Chris Ellis some early run support. Ray allows 3 runs on a season high 8 hits, in just 4 1/3 innings, he strikes out 8 & walks 2 – it’s his shortest outing since June 18th against the Orioles. Ellis goes 5 innings, allows 1 run on 5 hits, he strikes out 4 & walks 4. Bo Bichette singles home a run in the 5th to get the Jays on the board against Ellis & Marcus Semien doubles home the tying run in the 6th as the Blue Jays rally back against the O’s bullpen. Anthony Santander launches a 3-run bomb in the 7th to give the O’s the lead for good & snaps Toronto’s 8 game winning streak. Baltimore has won 5 games in September, 1 more than they won in August. 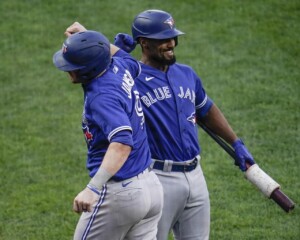 Game 2 : Doubleheader (Game 1) – Blue Jays 11, Orioles 10 – George Springer hits a 2-out, 2-run homer in the 7th to give Toronto it’s first lead of the game & the Blue Jays rally to get an important win in Game 1 of a Doubleheader. Anthony Santander hits a 2-run shot in the 1st & Lourdes Gurriel ties it on a 2-run shot in the 2nd & the scorefest was on as Austin Hays extends his hitting streak to a career-high 17 games on a 2-run bomb in a 3 run O’s 2nd. Vladimir Guerrero Jr. hits his 43rd homer as he closes in on the Triple Crown w/ a solo shot in the 3rd for the Jays but the O’s would keep the pressure on as Ryan McKenna drills a 2-run double to add to the Orioles lead & the Birds score 3 more times in the 4th as Hays homers for the 2nd time, Ryan Mountcastle follows w a solo shot as the pair goes back to back & Pedro Severino singles home another to add to the lead. Baltimore has homered 50 times @ home since the All-Star Break, best in the majors. Jake Lamb delivers a 2-run single in the 5th, Lourdes Gurriel Jr. drives home a run on an RBI single in the 7th, Lamb hits a sac fly to cut it to 1 & Springer’s 2-run bomb puts the Jays in front for good. Toronto is 23-6 when hitting 3 or more HR’s this season. Baltimore looked to avoid the DH sweep in Game 2. 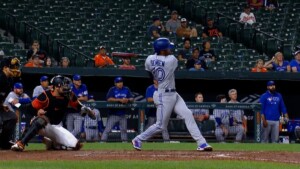 Game 3 : Doubleheader (Game 2) – Blue Jays 11, Orioles 2 – Bo Bichette & Alejandro Kirk each hit 2-run homers in an 11 run 7th innings the Blue Jays bust loose to take control after being shutout for the first 6 innings. Cedric Mullins hits a solo bomb in the 3rd to put the O’s ahead, as he joins the 29/29 club & inches ever so closer to 30/30. O’s starter Keegan Akin goes 5 shutout innings before being pulled in the 6th after giving up the lead on a 2-run blast by Bichette, as he & Kirk hit a pair of 2-run bombs. Akin allows 3 runs on 3 hits, strikes out 3 & walks 2, he came in w/ 2 wins & a no-decision in his last 3 starts & the Orioles had won all 3. Breyvic Valera brings home a run on a sac fly, Marcus Semien launches a 3-run shot & Teoscar Hernandez launches another 3-run bomb to cap the scoring, as the Jays tie a team record for an inning w/ 11 runs, 11 hits & 4 HR’s Thomas Hatch pitches 5 innings, he allows 1 run on 3 hits, strikes out 3 & walks 2. Toronto has now won 10 of their last 11 games & will go for the sweep on Sunday. Baltimore has now lost 4 of their last 7. 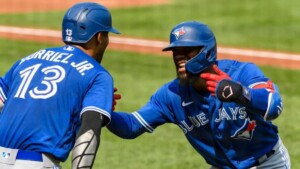 Game 4 : Blue Jays 22, Orioles 7 – The Blue Jays hit 5 homeruns, including 2 Grand Slams, go on to pound the Orioles & finish 2 runs short of the franchise record in a game that was over before it started. Toronto scores 5 times in the 1st as Teoscar Hernandez is hit by a pitch w/ the bases loaded by O’s starter Zac Lowther & Lourdes Gurriel Jr. launches his 4th Grand Slam of the season, setting the franchise record & Vladimir Guerrero Jr. adds a solo shot, his 44th of the year to tie him w/ Shohei Ohtani & blow the game open. Lowther allows 7 runs on 4 hits, strikes out 4 & walks 3 in only 2 innings of work against a murderers row of hitters & nobody else would fare any better. Spenser Watkins is shelled for 7 runs in a 1/3 of an inning & Michael Baumann allows 6 runs in 3 innings of work. Danny Jansen drills a 2-run double & scores on a single by Breyvic Valera, Jake Lamb hits a solo shot & Teoscar Hernandez launches the 2nd Grand Slam of the game for Toronto & Valera adds 2-more as he drives in 3 runs on 2 at bats in the 3rd inning alone & Toronto scores 10 runs, 1 short of the 11 they scored in the 7th inning the previous night. Gurriel Jr. hits a 2-run bomb in the 5th & walks w/ the bases loaded in the 6th – he drives in 7 runs on the day & Danny Jansen also adds a 2-run single in the 6th, he has 4 hits, including 3 doubles & 4 RBI. Anthony Santander blasts a solo shot in the 6th & Austin Wynns launches a solo shot in the 7th but this game was way out of reach by then. Toronto has now won 11 of 12 & is heating up just in time for a Playoff push. Baltimore has now lost 5 of their last 8.

The Orioles will now host the Yankees for 3, looking to play spoiler again. New York is also in the AL Wild Card chase but needs to take care of business against the Orioles to keep pace.