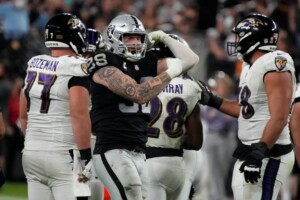 Raiders 33, Ravens 27 (OT) : Week 1 – Recap & Grades : Offense – This group performed well under duress as the offensive line was getting mauled & Lamar Jackson was running for his life all night as he rushes for 86 yards on 12 carries for an average of 7.3 yards per carry & passes for 235 & a TD but fumbles 3 times, losing 2 of them. Ty’Son Williams rushes for 65 yards on 9 carries, also an average of 7.3 yards per carry & 1 TD. The offensive line was on their heels all night as they could not contain the pass rush on either side & Jackson is sacked 3 times.
Grade : C
Defense – This unit played well early in the 1st half, but got gashed in the 2nd half as Derek Carr passes for 435 yards & 2 TD’s, he is sacked only 3 times despite constant pressure as this unit just could not consistently get home all night. They allow 491 total yards & had no answer for TE Darren Waller, who grabs 10 passes for 105 yards, the secondary also gave up some big plays including the game winning TD pass to a wide open WR Zay Jones for 31 yards. Josh Jacobs rushes for 34 on 10 carries & a TD, but this group does hold Las Vegas to only allow 82 yards on the ground.
Grade : C
Special Teams – This was one of the lone bright spots on the night & as usual was the strong point of this team. Justin Tucker connects on both of his FG attempts from 40 & 47 yards out & Sam Koch punts it away 4 times for 179 yards, an average of 44.8 yards per punt. Devin Duvernay totals 67 punt return yards, also recovers his own fumble when he drops a punt & there were no kick returns. Henry Ruggs returns 2 kicks for 33 yards & Hunter Renfrow 2 punts for 10 yards for the Raiders as the coverage is solid all night long.
Grade : B+
Coaching : John Harbaugh has always done more w/ less but this team is very depleted & it showed, yet no adjustments were made when needed, including bringing someone over to help out Alejandro Villanueva due to his inability to contain Maxx Crosby which was one of the main issues all night long. Ty’Son Williams was used early on & then forgotten about later as he was barely even used in the 2nd half. Greg Roman looked exactly the same & although the sense of urgency seemed to be there, the lack of game planning & adjusting to what was happening left a little bit to be desired.
Grade : B-
Overall Grade : C
GO RAVENS!!
#JustNotEnough