Baby Steps : The O’s avoid the sweep w/ after losing the first 2 games w/ a walk off win in extras in the finale to record their 8th victory in 19 games against the Yankees, the most wins against New York since 2016. 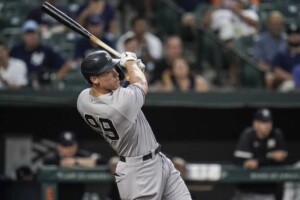 Game 1 : Yankees 7, Orioles 2 – The Yankees homer 5 times to account for all of their runs on longballs & Gerrit Cole pitches 5 innings as New York wins back to back games for the first time since September 1st & 3rd. Cole allows 1 run on 4 hits, strikes out 7 & walks 3 as he returns from left hamstring tightness in his last start on September 7th. Aaron Judge launches a 2-run bomb in the 1st, Giancarlo Stanton adds another 2-run bomb in the 3rd & Luke Voit follows up w/ a solo blast as the pair goes back to back. Joey Gallo hits a solo shot in the 8th & D.J. LeMahieu caps the homerun derby w/ a solo dinger in the 9th as New York ties it’s season high for HR’s. Gallo & Judge become just the 4th pair of teammates to hit their 34th homeruns in the same game.
Ryan Mountcastle drives in a run on a double in the 5th & Kelvin Gutierrez singles home a run in the 9th for the O’s only runs.
New York wins for the 3rd time in 11 games & is tied w/ Toronto in the AL Wild Card race. Baltimore has lost 5 of it’s last 6.

Game 2 : Yankees 4, Orioles 3 – Brett Gardner bloops a 2-run single in the 9th inning to give the Yankees the lead after a double steal & Aroldis Chapman closes it out as the Yankees take the series & keep pace w/ Toronto & Boston in the AL Wild Card race. Gio Urshela launches a 2-run bomb in the 3rd to give Yankees starter Nestor Cortes Jr. the early lead but Austin Hays hits a solo shot to get the O’s on the board against Cortes in the 6th. Cortes allows 1 run on 3 hits in 6 1/3 innings, he strikes out 11 on the night & walks 2. Hays hits a 2-out, 2-run bomb to put the O’s ahead in the 8th but the Yankees rally late to come from behind as Gardner’s 2-run single does the trick after a double steal by Tyler Wade & Gleyber Torres. New York clinches it’s 29th straight winning season, the 2nd most in major-league history, behind it’s own 39 year streak from 1926-64. Baltimore has lost 6 of it’s last 7.

Game 3 : Orioles 3, Yankees 2 (10 innings) – Yankees reliever Clay Holmes throws a wild pitch w/ 2 outs in the 9th, allowing the tying run to score & Austin Hays walks it off in the 10th as the O’s avoid the sweep & play spoiler to the Yankees Wild Card chances. Joey Gallo hits a solo shot & Gio Urshela drills an RBI double in a 2-run 2nd inning against O’s starter Chris Ellis. Ellis goes 4 2/3 innings, allowing 2 runs on 3 hits, he strikes out 3 & walks 4 but keeps the O’s in the game. Meanwhile, Yankees starter Jordan Montgomery dazzles as he strikes out a career high 12 in 5 2/3 innings, he allows 1 run on 6 hits & walks 1. Ryan Mountcastle hits a solo shot off of Zimmerman to become the Orioles rookie HR record w/ 29 & cuts the lead to 1 before Holmes wild pitch in the 9th. Hays chops a single though the drawn in infield in the 10th to score pinch-runner Jahmai Jones as the O’s walk it off. New York had won 4 in a row coming in & is now falls .5 behind idle Toronto & Boston in the AL Wild Card chase. Baltimore snaps a 5 game losing streak, they are 12-22 in 1 run games this season.

The Orioles hang tough for most of this series against a team who needed to win & is loaded w/ talent, a good measuring stick to where this team is. The O’s now travel to Boston for 3 & then head off to Philadelphia for 3 more as they continue to play hard while playing out the string.