That Sweeping Statement – The Orioles are swept away in their last trip of the season to Fenway Park as Boston continues to stay in control of their own destiny in the AL Wild Card race. 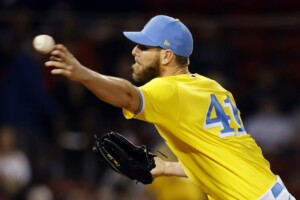 Game 1 : Red Sox 7, Orioles 1 – Chris Sale returns from his 2nd stint on the COVID list to pitch 5 innings of 1 run ball, allowing 2 hits, strikes out 1 & walks none & hits a batter as the Red Sox beat the O’s. The big lefty only allows a leadoff single to Cedric Mullins in the 1st & a solo homer to Austin Hays in the 2nd but nothing else the rest of the way as he picks up his 4th win of the season. Former Oriole, Jose Iglesias drives in run on an RBI double & Kike Hernandez adds a sac fly in a 2-run Red Sox 1st to give Sale all the run support he would need. Bobby Dalbec hits a solo homer in the 4th, J.D. Martinez doubles in a run in the 5th & Hunter Renfroe clears the bases w/ a 3-run double in the 6th. O’s starter Keegan Akin allows 4 runs on 6 hits & 3 walks & strikes out none in 4 innings of work, he loses for the 10th time this season. Boston as won 3 in a row & remains in 1 of the 2 Wild Card spots w/ New York, while Toronto is a .5 game back. Baltimore loses for the 100th time on the season, their 3rd consecutive 100+ loss season in a 162 game format.

Game 2 : Red Sox 9, Orioles 3 – Xander Bogaerts homers & drives in 4 runs to carry the AL Wild Card leading Red Sox to another win over the Orioles. Ryan Mountcastle hits a 2-run shot in the 1st for the O’s (his 30th of the year) but the Red Sox strike back quickly as Rafael Devers singles home a run & scores on a 2-run double by Bobby Dalbec in a 3-run 1st inning for the Red Sox, Devers also has 3 hits. Austin Wynns hits a solo homer in the 2nd to toe the game against Boston starter Nick Pivetta, who allows 3 runs on 7 hits in 3 2/3 innings, he walks 1 & strikes out 3, earns a no decision. O’s starter, Zach Lowther allows 3 runs on 5 hits, strikes out 2 & walks 2 in 3 1/3 innings, he also gets the no decision. Bogaerts singles in a run in the 5th to put the Red Sox ahead & Hunter Renfroe doubles in a run & scores on a 3-run blast by Bogaerts to break the game open. Boston has now won 4 in a row & they are 1 game ahead of Toronto & 1.5 games ahead of New York in the AL Wild Card race. Baltimore has dropped 11 of their last 12 against Boston, despite sweeping the Red Sox @ home to open the season, they have a league-leading 101 losses. 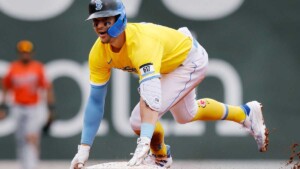 Game 3 : Red Sox 8, Orioles 6 – Kike Hernandez sparks a 3-run late inning rally w/ a single off the 2nd base bag in the 7th after the Orioles had scored 3 times to take the lead. The Red Sox score 3 times in the 1st inning against O’s starter Alexander Wells as Bobby Dalbec is hit by a pitch w/ the bases loaded & Kevin Plawecki singles home 2 to put Boston ahead early & Hernandez drives in another on an RBI double in the 2nd, he has 2 hits, scores twice & drives in 2 on the day. Anthony Santander doubles home a run & scores on a 2-run single by Austin Hays as the O’s rally to cut the lead to 1. J.D. Martinez puts the Red Sox ahead on a solo shot in the 3rd but Trey Mancini clears the bases w/ a 3-run double down the left field line to give the O’s the lead in the 7th before Hernandez singles home a run & scores on a double by Hunter Renfroe, who scores on a single by Rafael Devers. Boston has won 5 in a row & leads Toronto by 1 game & New York by 2.5 in the AL Wild Card race. Baltimore has lost 12 of their final 13 meetings against the Boston & has a league leading 102 losses w/ Arizona close behind.

The Orioles run into buzzsaw & are swept by a Red Sox team that is really locked in right now & is chasing a Playoff Berth. The Birds will now head south Philadelphia to play the Phillies for 3.