Spoil Sports : The Orioles take 2 out of 3 from the Red Sox & deal Boston a crucial blow to their Playoff hopes, while playing some inspired Baseball to end the season on a high note. 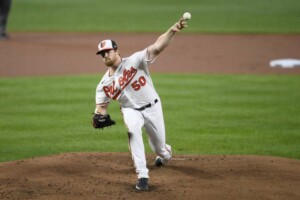 Game 1 : Orioles 4, Red Sox 2 – Ryan Mountcastle homers & the Orioles rally to beat Chris Sale & humble a Red Sox team who needs every game they can get down the stretch. Kyle Schwarber hits a solo shot in the 2nd & Hunter Renfroe adds another in the 6th to back a great performance by Sale, who goes 5 1/3, allows 3 runs on 4 hits, strikes out 6 & walks 1 but loses for the first time this season & in his last 14 starts (Sale was 10-0 previous 13 starts against the O’s). Bruce Zimmerman tosses 4 innings of 1 run ball, he allows just 2 hits, strikes out 2 & walks 2 in his first appearance since June 13th. Mountcastle drills a 2-run shot to tie the game & Pedro Severino gives the Birds the lead on short single as they chase Sale from the game & take the lead. Ryan McKenna tacks on 1 more 8th w/ an RBI single & Cole Sulser closes it out in the 9th. Boston had won 12 of the last 13 games against the Baltimore, who still is on competition w/ Arizona for the #1 draft pick. 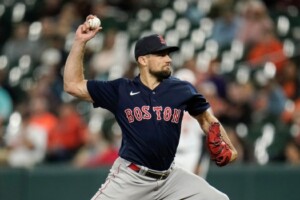 Game 2 : Red Sox 6, Orioles 0 – J.D. Martinez homers & drives in 3 to back a solid performance by Nathan Eovaldi as the Red Sox rebound from the night before & beat the Orioles. Martinez blasts a solo shot in 1st & drills a 2-run double in the 6th to add to the lead – he has 3 hits on the day, while Eovaldi pitches 6 shutout innings, allows just 4 hits, strikes out 7 & walks only 1. O’s starter – Rookie, Zac Lowther allows 2 runs but only 1 earned, on 8 hits, strikes out 4 & walks none. Alex Verdugo provides a 2-run single in the 8th & Hunter Renfroe hits a solo shot in the 9th to tack on even more. The Red Sox failed to score more than 3 runs in any game while getting swept by the Yankees & made it 4 games in a row before finally snapping that skid in this game. Boston snaps a 4 game losing streak & moves within 1 game of New York for the top spot in the AL Wild Card. Baltimore can still win the series & will look to do so in the finale. 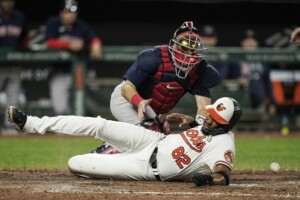 Game 3 : Orioles 6, Red Sox 2 – Ryan Mountcastle homers again & the Orioles use a 3-run 6th inning to put the Red Sox away & take 2 out of 3 to win the series against a Boston team that desperately needed to win this series to keep their Playoff hopes alive. O’s starter, Alexander Wells goes 6 strong innings, allowing just 1 run on 3 hits, walking 2 & striking out 2 – he entered the game w/ an ERA over 7. Kike Hernandez hits a solo shot in the 1st to give Boston the lead early but Mountcastle launches a 3-run shot in the 1st to put the Orioles on top for good. Boston starter, Nick Pivetta is roughed up for 3 runs on 4 hits in 4 2/3 innings, he strikes out 8 & walks 2 as he can never find his rhythm all day & takes the loss. Tyler Nevin adds a 2-run single & Trey Mancini hits a sac fly to add to the lead in a 3-run 6th. J.D. Martinez scores on a wild pitch by reliever Joey Krehbiel in the 7th but the Sox can get no closer. Boston has lost 5 of their last 6 to New York & Baltimore, scoring only 19 runs in the process. Baltimore finishes 27-54 @ home, the worst record in the majors.

The O’s win the last home series & were able to play spoiler against one of their rivals in the process. They now head to Toronto to close out the season, looking to wreck the Blue Jays season as well.