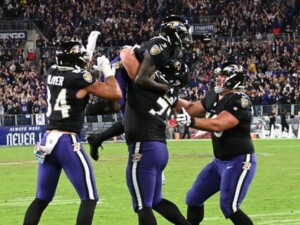 Ravens 31, Colts 25 (OT) : Week 5 – Recap & Grades : Offense – This group tallies 523 total yards, including 499 by QB Lamar Jackson himself, as he runs for 62 on 15 carries, an average of 4.4 yards per carry & passes for 442 & 4 TD’s. He is sacked twice but the offensive line holds up for the most part all night despite losing another lineman in the 2nd quarter. The 3 Raven RB’s only combine to rush for 24 yards on 11 carries but Jackson makes up for the lack of production by gaining yards himself. Mark Andrews has a huge night, as he grabs 11 passes for 147 yards, an average of 13.4 yards per reception & 2 TD’s. Marquise Brown grabs 9 for 125 & 2 TD’s of his own, an average of 13.9 yards per reception.
Grade : A
Defense – Normally a solid unit, this group is having trouble so far this season & it’s mostly due to lack of personal because of injuries, especially the LB’s & CB’s as the lack of tackling continues to be an issue as well as the coverage ability. The only pass rush that was generated was once again due to blitzing as they register only 2 sacks despite getting constant pressure all night. The secondary had it’s issues as Anthony Averett was picked on pretty much all night & Carson Wentz passes for 402 yards & 2 TD’s. They allow 513 yards of total offense, including 123 on the ground but they do get a huge takeaway on a strip sack of Wentz by Odafe Oweh, their only one of the night. This group simply needs to get better all the way around, they simply struggled to get the Colts off the field all night.
Grade : C
Special Teams – Justin Tucker connects on his only FG of the night from 23 yards & Sam Koch punts it away 4 times for 198 yards, an average of 49.5 yards per punt. Devin Duvernay collects 111 yards on 5 kick returns, an average of 22.2 per return & the coverage is pretty solid but could of been better, as they allow 76 total return yards, 46 kick return yards to Ashton Dulin on 2 kick returns & 30 by Nyhiem Hines on 3 punt returns. Marlon Humphrey jumps offsides on a missed FG just before the half that allows a re-kick that was made, a huge mistake that could of made a huge difference but Calais Campbell also comes up w/ a huge block on a FG attempt in the 4th quarter to keep the game within reach. Just a few things to clean up on a unit that is normally solid every week.
Grade : A-
Coaching – The team came out flat to start the game but felt the sense of urgency as the game wore on. There were also some crucial time outs that were taken late in the game that displayed great clock management & allowed enough time to complete the comeback. You can tell the adjustments were made that needed to be made as the game continued on both sides of the ball. All the coaches seemed to be on the same page which means a lot communication was going on in crunch time. The blocked FG was a huge play call that had different personal on the field & Indianapolis never picked up on it. The combination of attention to detail, 2nd half preparation & clock management proved to be the deciding factor late in the game & that is a testament to the entire coaching staff.
Grade : A
Overall Grade : B+
🏈🏈🏈
GO RAVENS!!
#CardiacCity