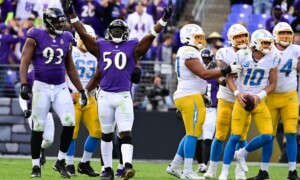 Ravens 34, Chargers 6 : Week 6 – Recap & Grades : Offense – This group got it going on the ground early, running for 187 yards as a team, led by 53 from Devonta Freeman on 9 carries, an average of 5.9 yards per carry & a TD. Lamar Jackson also rushes for 51 yards on 8 carries, an average of 6.4 yards per carry & passes for only 167 & a TD but hr didn’t need to do much through the air. He does throw 2 picks but 1 isn’t his fault as it bounces off the hands off Rookie WR Rashod Bateman, who grabs 4 passes for 29 yards, an average of 7.3 yards per catch w/ all 4 going for 1st downs as well. Mark Andrews leads all receivers w/ 68 yards on 5 receptions, an average of 13.6 yards per reception. The offensive line still needs improvement in pass protection as Jackson is sacked 3 times but that unit is making progress after being a patchwork line to start the year, they are finally starting to get some continuity playing together.
Grade : B
Defense – The stars of the day, this entire group was making plays all day, as they hold a potent Chargers offense to just 208 yards of total offense, including just 26 on the ground. Just a dominating performance by this unit that had not been playing well coming in to this week & was the unusual primary concern in this game. Austin Ekeler is held to just 7 yards on 6 carries, an average of just 1.2 yards per carry & the Chargers leading rusher was QB Justin Herbert w/ 12 yards on 2 carries, an average of 6 yards per carry. Herbert also passes for just 195 yards, a TD & an INT & is sacked twice by this tenacious group that played fired up all day. This was one of the best performances by this group in years & it reminded you of the vintage Defense from days of Ravens past.
Grade : A+
Special Teams : Justin Tucker connects on both of his FG’s from 52 & 39 yards out, Sam Koch punts it away 2 times for 86 yards, an avid 43.0 yards per punt & Devin Duvernay totals 114 return yards, 70 via kick return, an average of 35.0 per return & 44 on 3 punt returns, an average of 14.7 yards per return, as he continues to have solid games week in & week out. This group does allow 82 return yards on 5 kick returns, K.J. Hill Jr. returns 3 for 50, an averageof 16.7 yards per return & Jalen Guyton gets 32 yards on 2 returns, an averageof 16.0 yards per return. Overall another solid performance by this group though, as they remain a solid group that is always reliable & can be depended on.
Grade : A-
Coaching : Coach Harbaugh had this team more than ready to roll from the beginning as they came flying out of the gate like a bat out of hell & never took their foot off the gas. The entire coaching staff continues to do a magnificent job, just as they have done all season but this might be the most impressive win so far. A team that came in hot as well & has multiple weapons but failed to do any damage because the coaching staff had a great game plan from the beginning. They knew what needed to be done & were able to exploit some key weaknesses that they saw which indicates great attention to detail & game planning. This game was just another example of how good this entire staff can be & what they are capable of when they are all on the same page.
Grade : A
Overall Grade : A
🏈🏈🏈
GO RAVENS!!
#PowerOutage