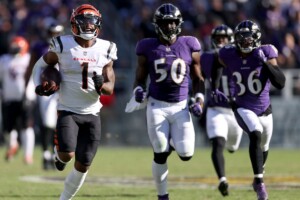 Bengals 41, Ravens 14 : Week 7 – Recap & Grades : Offense – Not one of the best performances by this group, as they were overmatched by a Cincinnati Defense that caused havoc all day long against an already undermanned O-line that also lost RT Patrick Mekari in the 2nd quarter w/ an ankle injury. Lamar Jackson runs for 88 yards on 12 carries, an average of 7.3 yards per carry & passes for 257, an average of 8.3 yards per pass but also sacked 5 times & constantly under pressure. The RB’s can get nothing going all day as they carry 11 times for just 29 yards on the day & the running game was almost non-existent, other than Jackson making plays w/ his legs. Jackson hits Marquise Brown on a 39 yard TD pass in the 3rd to give the Ravens their only lead of the game, which would be very short lived. Brown catches 5 passes for 80 yards on the day, including his TD, an average of 16.0 yards per reception. Too much passing & not enough emphasis on running the ball early to set up the passing game.
Grade : B-
Defense – This group had one of their worst performances of the season so far as they allow 520 yards of total offense on the day, Joe Burrow becomes the 2nd QB in 3 weeks to torch this secondary for over 400 yards, as he passes for 416 yards & 3 TD’s. He does throw a pick to CB Marlon Humphrey in the endzone, which ironically is the man that was torched all day by WR Ja’Marr Chase, who grabs 8 passes for 201 yards, an average of 25.1 yards per reception & a TD, including an 82 yarder from Burrow that would put them ahead for good in the 3rd. They get almost no pressure all day long, as they register only 1 sack & also allow over 100 yards on the ground as RB Joe Mixon runs for 59 yards on 12 carries, an average of 4.9 yards per carry & a 21 yard TD run in the 3rd. RB Samaje Perine also rushes for 52 yards on 11 carries, an average of 4.7 yards per carry, including a TD run of 46 yards in the 4th as well. Lots of work to do w/ this group as the tackling was once again terrible & continues to be an issue. The coverage on the back end has got to tighten up as well.
Grade : C
Special Teams – A pretty good day for this group, which is usually the case. Justin Tucker connects on his only FG from 45 yards, Sam Koch punts it away 6 times for 264 yards, an average of 44.0 yards per punt, including a touch back. Devin Duvernay collects 92 return yards, as he returns 2 kicks for 37 yards, an average of 18.5 yards per return & 2 totals 45 yards on 2 punt returns, an average of 22.5 yards per return. Darius Phillips returns 3 punts for 20 yards, an average of 6.7 yards per return as the coverage is solid all day long & there were no kick returns due to Justin Tucker booting into the endzone every kickoff. This group is solid as always but gets overlooked due to that same fact, when you don’t hear anything from a player or personal group most of the time that is a good thing as it means they are doing what they’re supposed to do. There were also some limited opportunities due to the offense going for it on 4th down in their own territory numerous times.
Grade : A-
Coaching – The coaching staff has work to do as much as the players do & should be held accountable because this loss is on them as well. They overlooked the Bengals & got a shock as the game plan did not go the way it was supposed to. There were times that they could of made adjustments in certain areas, yet the strategy stayed the same despite it clearly not working as the game wore on. The injuries have made things harder on the coaches & that’s understandable but to make no adjustments when everyone in the stadium knew what the weakness in the defense was is unacceptable. This goes down as a lack of communication or a lack of respect for an opponent that came up & caught the entire league by surprise, asserting their will & outplaying this team in every aspect. The coaching staff needs to get better & pay more attention to the things this team doesn’t do well right now. The Bye Week comes at the perfect time & it should be just what the team & the coaches need right now.
Grade : C
Overall Grade : C
🏈🏈🏈
GO RAVENS!!
#WakeUpCall