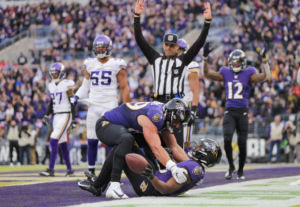 Ravens 34, Vikings 31 (OT) : Week 9 – Recap & Grades : Offense – Another spectacular day for this group after another slow start as Lamar Jackson leads the charge as he rushes for 120 yards (his 10th career 100 yard rushing game, tying Micahel VIck) on 21 carries, an average of 5.7 yards per carry & passes for 266, as well as 3 TD’s & 2 INT’s – 1 of which was a tipped pass by OLB Anthony Barr which he also intercepted in Overtime. The offensive line had a solid day, despite allowing 3 sacks & pressure most of the but was very strong in the run game as Devonta Freeman rushes for 79 yards on 13 carries, an average of 6.1 yards per carry & Le’Veon Bell rushes for 48 yards on 11 carries, an average of 4.4 yards per carry & also rushes for a TD. The passing game is once again solid, as Marquise Brown has another fantastic game – hauling in 9 receptions for 116 yards, an average of 12.9 yards per reception. The running game wore down the Minnesota front like down the stretch & delivered when called upon to close the game out. Still work to be done in the trenches as this group looks to get healthy but overall a pretty good performance by this group. The slow starts have got to get fixed moving forward, this team already has 3 comebacks from double digits, can’t keep making that a habit.
Grade : A-
Defense – Oh man, so many things to fix w/ this group but the most glaring is that they continue to give up big plays in both the run & pass games. Dalvin Cook rushes for 110 yards on 17 carris, an average of 6.5 yards per carry, including a 66 yard burst early in the game as well as Justin Jefferson hauling in a 50 yard TD bomb from Kirk Cousins previously. They allow just 318 total yards but the 2 big plays were crucial in Minnesota taking the lead, despite holding Cook to just 44 yards rushing the rest of the way & Cousins to just 187 passing on the day, this group still continues to miss tackles & have communication issues on the back end. They sack don’t register any sacks & do not force any turnovers either, basically just getting key stops when they needed too. Coverage, tackling & getting pressure on the QB are the major issues that stand out w/ this unit. They will have to improve moving forward because the Offense cannot keep bailing this team out the way it has, it simply isn’t sustainable.
Grade : C
Special Teams – This group had an unusually rough day as they were outplayed for probably the first time all season. They allow a 98 yard kickoff return by Kene Nwangwu to start the 2nd half – he returned 2 kicks for 121 yards in the game, an average of 60.5 yards per return & runs 9 yards for a 1st down on a fake punt. Being a former special teams coach, John Harbaugh cannot like the way things unfolded w/ this usually solid unit. It’s rare that they have agame like this, so there should be no reason to panic moving forward but it is definitely something that stood out as it kept Minnesota in the lead. Justin Tucker connects on both of his FG attempts, including the game winner from 36 yards out. Sam Koch punts it away 3 times for 125 yards, an average of 41.7 yards per punt & Devin Duvernay totals 38 return yards.
Grade : B
Coaching – Another resilient win by this gutsy team & that is directly a testament to the entire coaching staff. They have been great at making adjustments in game but the slow starts are a little bit of a head scratcher. The preparation seemed good, things just didn’t go the way they were supposed to early but once again, the coaches were able to communicate what changes needed to be made & get the job done. There needs to be a little bit more urgency to start faster but that’s more or less on the players then the coaches. The evaluation of talent has also been there as the players who have been asked to step up continue to do so. The focus of this coaching staff moving forward will be to keep this team grounded no matter how much it continues to win. The injuries can show up at any time so it’s been a good job by this entire staff to keep this team focused & that showed up on Sunday.
Grade : A
Overall Grade : B-
🏈🏈🏈
GO RAVENS!!
#BreatheAgain