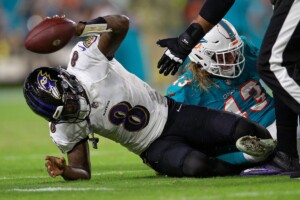 Dolphins 22, Ravens 10 : Week 10 – Recap & Grades : Offense – Just a terrible performance by this group, as there were no adjustments made all night long by the coaching staff in terms of the play calling, when they knew what to expect coming into this game. Lamar Jackson rushes for 39 on 9 carries, an average of 4.3 yards per carry & passes for 238 through the air, including a TD & an INT, he is also sacked 4 times. He is flustered all night by a Cover Zero Defense that for some reason baffled the entire Offense & coaching staff. Devonta Freeman rushes for 35 on 10 carries, an average of 3.5 yards per carry but the Offense is stagnant all night long, as they are never able to make any adjustments to the Cover Zero coverage that Miami ran 40 times! Yes, 40 times!! Rashod Bateman grabs 6 passes for 80 yards, an average of 13.3 yards per grab. The Offensive line was paper thin, as the Miami Defense just kept Blitzing & Blitzing all night long, while the coaching staff once again had no answers.
Grade : D
Defense – This group played well enough to keep them in the game despite a couple huge breakdowns in coverage that led to scores. This continues to be a an issue & has been all season, the continuous lack of communication & breakdowns have led to big plays nearly every single week & it never gets better. They generated a little more pass rush wise registering 4 on the night, including another by Odafeh Oweh has one of sacks & they allow 350 total yards, including 290 yards combined by 2 different QB’s & fail to force a turnover again. They did well to stop the run, allowing only 60 yards on the ground but Miami ran it sparingly as the air attack was working better. The major problem was the 2 breakdowns in coverage which ended up being the difference in the game. More work to do for this group, they simply aren’t forcing turnovers or getting many sacks & that is not the recipe for success.
Grade : B-
Special Teams – This group was good but could of been better. Justin Tucker misses a huge 48 yard FG that would come back to haunt him, Sam Koch punts it away 8 times for 321 yards, an average of 40.1 yards per punt, including 4 inside the 20. Devin Duvernay returns 1 kick for 21 yards & 1 punt for 9 yards, as the return game was never really a factor on the night. Solid coverage as well as Miami totals just 10 punt return yards on 2 returns – 6 by Jalen Waddle & 4 by Jovan Holland. No trick plays allowed like last week but the missed FG loomed large all night as a 2 score loss could of been cut to 1 & who knows what the outcome would have been. Overall, just an ordinary day for this unit, as it usually is. The lack of a big play but this group has been the theme all season w/ the exception of the kicking game.
Grade : B-
Coaching – This is where all the criticism lies this week. The lack of preparation & planning as well as the game plan left so much to be desired, I don’t even know where to start. This team was clearly overlooking the Dolphins & made the crucial mistake of thinking about 2 years ago & the blow out win instead of concentrating on the task at hand & treating this just like any other game. Then on top of that there were no adjustments made to the strategy being employed by Miami despite them using the same Defense over & over & the offense not being able to stop it. In weeks past this staff has been great at making in-game adjustments but this time they seemed lost & confused w/ no answer as to how to counter punch despite having the personnel to do so. The entire staff needs to take a look in the mirror & do some soul searching as does this entire team. When you are as banged up as this team is, you cannot afford to lose games that you just give away because you couldn’t adjust mid game. This was a winnable game that became a nightmare because the coaching staff didn’t give this team the best chance to win.
Grade : D
Overall Grade : D+
🏈🏈🏈
GO RAVENS!!
#SomethingFishy