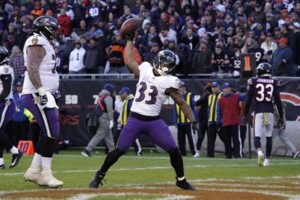 Ravens 16, Bears 13 : Week 11 – Recap & Grades : Offense – This group performs well despite missing some key starters, including Hollywood Brown & Lamar Jackson. The loss of Jackson was huge but Tyler Huntley was able to fill in admirably despite finding out he was starting on the way to the bus, as he leads a late 72-yard TD drive to seal the win. Huntley showed lots of command while in control, as he passes for 219 yards & an INT, also rushes for 40 yards on 16 carries, an average of 3.1 yards per carry. Devonta Freeman rushes for 49 yards on 16 carries, an average of 3.1 yards per carry, including the game winning TD. Mark Andrews hauls in 8 receptions for 73 yards, an average of 9.1 yards per reception. They total 299 yards of Offense on the day while using backups in key positions.This Offensive line does well in run blocking but is horrible in pass protection as they allow 6 sacks & force constant pressure all day on Huntley. The play has got to be better from a pass protection standpoint, that has really been one of the main issues all season & just continues to be a problem week in & week out. Missing the players that they were & still finding a way to score the go ahead TD in the final 2 minutes was impressive any way you slice it but the pass protection needs to improve for this unit to strive, the pass rush has just been overwhelming to them at times.
Grade : B-
Defense – This might of been the best effort by this unit all season, they hold Chicago to 353 total yards, including just 92 on the ground, also limiting Justin Fields to 79 yards passing & 23 yards rushing before he left w/ a rib injury. They force a huge fumble on a sack by Tyus Bowser which led to a huge FG before the half. Bowser has 2 sacks on the day. 1 of which seals the game on the final play as well as records 5 tackles. They do allow 2 TD passes to Andy Dalton, including a 60 yarder to Darnell Mooney on a screen in the 3rd quarter which gave the Bears their first lead & a 49 yarder to Marquise Goodwin that puts them ahead again late in the 4th, as Chris Westry was beat on a double move but those were the only 2 big plays allowed on the day, as for the most part this group got the job done. They hold Chicago to 2 for 11 on 3rd down, but also give up the big TD to Goodwin on 4th & 11. They register 3 sacks & perform well against the run w/ the secondary being the only weak link but only due to 2 big plays. No miscommunication on this day as despite only having 3 healthy CB’s this group still held up well & got some key stops when they needed too. The LB’s have their best performance of the season as well, as they were all over everything thrown their way & defended both the run & pass as well as they have all season, registering 4 tackles for loss as well.
Grade : B
Special Teams – Another solid performance by this unit as they prove to once again be the backbone of this team. Justin Tucker connects on all 3 of his FG attempts in a windy environment & sketchy field conditions as he connects from 35, 27 & 46 yards on his 32nd Birthday. Sam Koch punts it away 6 times for 260 yards, an average of 43.3 yards per punt & 1 touchback. Devin Duvernay totals 69 return yards, returning 2 kicks for 19 yards & 2 punts for 50 on the day. The kick coverage is solid again, as they allow only 21 total return yards on the day- 4 by Jakeem Grant Sr. & 17 by Khalil Herbert. Jaylon Ferguson partially blocks a punt by Pat O’ Donnell in the 4th that gives the offense good field position late to kick what at the time was the go ahead FG. This group continues to do it’s part as they have been a huge part of this teams success so far. Keeping them in games w/ solid coverage, clutch kicks & smart plays. No real room for any complaints here, it’s rare that this group has any issues, in fact they have made game changing plays like the block by Calais Campbell in Week 5 & Ferguson in this game.
Grade : A
Coaching – A great rebound game for this coaching staff as a whole, after the embarrassment of their last game & having to deal w/ some key injuries or illnesses to some major players, they were able to scheme up a game plan that got the job done despite the circumstances. They definitely had this short handed team ready to go in the elements & made some adjustments from last week that proved to be key in the end. The decision to run a cover zero on 4th & 11 that allowed the would be winning TD was crucial because it allowed the Offense more time instead of dying a slow death. This team was mentally & physically prepared this time around as they played w/ a different intensity & looked more rested coming off the 10 days of rest. There was focus & preparation this time around & the sense of urgency was there as well. The entire coaching staff was on the same page & was ready for whatever was thrown at them, they were able to lead this team to victory w/ some crucial decisions & that comes down to communication by all the coaches, they never wavered when things got dark & that was passed over to the entire team. This was a coaches game in every sense of the word, they were tested but when the time came to coach, they did just that.
Grade : A
Overall Grade : A-
🏈🏈🏈
GO RAVENS!!
#GutsAndGlory