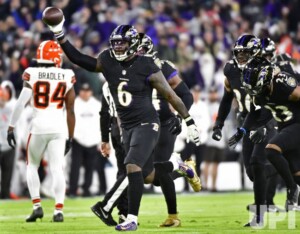 Ravens 16, Browns 10 : Week 12 – Recap & Grades : Offense – Just an ugly performance by this unit, as they fail to score more than 16 points for the 3rd game in a row & turn the ball over 4 times but still get the win in a tough Division game on Primetime. Lamar Jackson rushes for 68 yards on 17 carries, an average of 4.0 yards per carry to lead the way on the ground but is terrible through the air, as he passes for just 165 yards, 1 TD & a career high 4 interceptions. He just does not look right coming off of his illness last week as his game was just not the same, however he still mad enough plays to win the game, including a 13-yard TD pass to Mark Andrews where he extended the play long enough w/ his legs to hit find him in the endzone. He is sacked twice & pressured for most of the night but the Offensive line does a better job then they did in previous weeks. It held up for most of the night but the Ravens also used a heavy backfield w/ extra blockers for most of the night. Devonta Freeman carries it 16 times for 52 yards, an average of 3.3 yards per carry & Andrews leads the way in the passing game as he hauls in 4 receptions for 65 yards & a TD. Overall, it was enough to get the job done but only thanks to the Defense which bailed this group out all night. Too many turnovers & missed opportunities made this game way closer than it should of been, mostly due to Jackson & his 4 picks which allowed Cleveland to hang around longer than they should of. This unit needs to start getting healthy & getting on the same page, they have struggled the last few weeks due to certain Defensive schemes that they just haven’t had an answer for & that is an issue that can not go unnoticed.
Grade : C
Defense – Another solid outing by this group which makes 2 weeks in a row that they have held a team to less than 17 points, they register 2 sacks & recover 2 fumble, 1 that they force on a strong hit by Odafe Oweh. They also generate more of a pass rush than in previous weeks & also bottling a strong Cleveland running game, that came in #1 in the league all night long. They hold Nick Chubb to just 16 yards on 8 carries, an average of 2.0 yards per carry & Kareem Hunt to just 20 yards on 7 carries, allowing only 40 yards rushing on the ground, without DT Calais Campbell, making it a group effort as Patrick Queen has 2 tackles for loss, the Defense totals 6 on the night. The secondary holds up much better despite being down some key members, allowing only 247 yards passing to Mayfield, while keeping him under pressure for most of the game. They give up just 262 yards of total offense, one of the lowest outputs allowed all season. This group has really stepped up in recent weeks allowing less big plays & communicating more as a unit all around. They will be called upon moving forward as the Offense looks a little out of sync due to the schemes that opposing Defenses are running. This Defense has been picked up by the Offense for most of the season, now it’s their turn to return the favor & start clamping down, as it starts to get colder they will be relied on even more down the stretch against a slew of DIvision opponents.
Grade : A
Special Teams – Death, taxes & the Ravens Special Teams unit. This group is solid again, just like usual as Justin Tucker connects on all 3 of his FG’s from 52, 25 & 49 yards out & Sam Koch punts it away 3 times for 136 yards, an average of 45.3 yards per punt. Devin Duvernay returns 3 punts for 36 yards, an average of 12.0 yards per return, while the coverage is solid, allowing only 12 total return yards, 15 by JoJo Natson & Demetric Felton loses 3 yards on the only punt return. This group hasn’t had many bad games or performances in not only this season but in recent years as well, since the Harbaugh era & even in earlier years, this has been one of the most consistent units on this team. Cleveland was deep in their own territory for most of the night due to a few punts by Koch, who also had a touchback & solid coverage on returns. There is never any glaring issues in this phase of the football team due to the veteran leadership & also coach Harbaugh’s history as a Special Teams coach.
Grade : B
Coaching – The coaching staff once again gets their props for this one, even though the better decision might have been to go w/ Tyler Huntley because Lamar looked like the effects from his illness were lingering, they stuck w/ their guns & that’s respectable. Overall the entire staff seemed to be on the same page as usual & had a good gameplan on both sides of the ball, the Offense just had trouble executing & holding up their end. The adjustments that needed to be made were made & there seemed to be communication on every level throughout the entire game. The attention to detail & preparation led to a huge win & it seemed as if all the coaches knew what was on the line. The sense of urgency was there despite the players not executing, the coaches did put together the correct game plan & took the correct approach going into the game. This coaching staff deserves all the credit in the world for having this team where it is at this point in the season, they have overachieved & continue to do so. Coaching has kept this team afloat & that is a testament to this entire organization’s mentality & culture.
Grade : A-
Overall Grade : B
🏈🏈🏈
GO RAVENS!!
#BattleTested