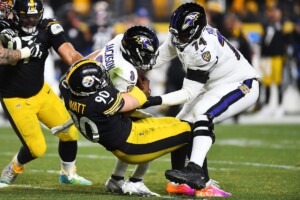 Steelers 20, Ravens 19 : Week 13 – Recap & Grades : Offense – Another game where this group failed to score 20 points, the 4th game in a row that has occurred & once again most of the blame falls on Lamar Jackson despite being sacked 7 more times to make it 37 times he has been sacked this season behind an Offensive line that just continues to struggle in that area. Jackson leads the way on the ground & through the air, passing for 253 yards, 1 TD & 1 crucial interception in the endzone & leads an 8 play, 60 yard scoring drive in the final minute but the 2-point conversion fails. He also rushes for 55 yards on 8 carries, an average of 6.9 yards per carry. Devonta Freeman also rushes for 52 yards on 14 carries, an average of 3.7 yards per carry & a TD, which comes on a 99-yard TD drive. Marquise Brown grabs 5 passes for 55 yards, an average of 11.0 per reception. The lack of production the past few weeks has to be a concerning issue going forward as this team has had trouble protecting the QB, incorporating different players into the Offensive scheme & making adjustments in game. There has been a drop off in production the last few weeks & that has got to change because the Defense has some major injuries, which was the reason for the 2-point conversion attempt to win the game. The play call was spot on but the execution was flawed & that 1 play decided the final outcome.
Grade : B-
Defense – This unit played well in the 1st half but crumbled the rest of the game which has been a recurring theme in most of the games this season. They allow 321 total yards on the day but only 85 on the ground as they stuff the run for most of the game just as they have for most of the season. The run Defense has been the best part of this group & they held firm in this game despite allowing more yardage on the ground in the 2nd half. The secondary was shredded in the 2nd half as well, as Pittsburgh stormed back to score 17 unanswered points, ultimately taking the lead late. They allow 2 TD passes by Ben Roethlisberger & only register 1 sack despite getting pressure for most of the game & the secondary took the hit for it. The pass rush not getting hole continues to plague this group because it leaves the comers one on one for too long & they are losing the battle most of the time. The injuries continue to pile up as Marlon Humphrey now joins the list of Ravens on IR, as 3/4 of the starting secondary is now gone. Teams will continue to pick on the backups going forward so the pass rush & the run Defense will be relied upon even more then they already were.
Grade : B-
Special Teams – Justin Tucker hits on both of his FG attempts from 35 & 28 yards out & Sam Koch punts it away 4 times for 203 yards, including 1 inside the 20. Devin Duvernay returns 2 kicks for 61 yards, an average of 30.5 yards per return & also totals 12 yards on 2 punt returns. This group has been the best unit on this football team all season, their reliability has been a huge part of keeping this team together. They are the glue & the backbone, they continue to have solid outings, week in & week out – from the snaps to the holds & the kicks to the kick returns & kick coverage. They do give up 79 total return yards to Ray Ray McCloud, who returns 3 kicks for 46 yards & 4 punts for 33 yards. S As a former Special Teams coach, John Harbaugh has to love the way this group performs week in & week out, every player on this unit does their job & that has been the case all throughout the Harbaugh era. You get the feeling that Duvernay is overdue for a long return as every week he comes closer & closer to returning one all the way.
Grade : A
Coaching – Great job by the coaches to have the guts to go for 2, even though the situation may have dictated it anyway. Losing Marlon Humphrey left the team w/ just 1 healthy corner (Chris Westry) left to play & that was not a chance that Harbaugh wanted to take heading into OT. That decision was backed by the players as well as the entire coaching staff so you already know that everyone was on the same page. The communication late in the game must of been flowing because there was no hesitation when the time came to try & go for the win. The preparation also seemed to be there but the lack of personnel just makes it hard to compete in some areas no matter how good the coaching is or could be. This game was well coached for the most part but the 1 thing that stands out is the lack of in game adjustments by the coaching staff as teams continue to employ the same strategies & are finding success in doing so. Back to the drawing board as they try to solve the issues that have hindered this team on recent weeks. Injuries have made everyone on this staff’s job even harder but they have not wavered & continue to rise up to the challenge.
Grade : B+
Overall Grade : B-
🏈🏈🏈
GO RAVENS!!
#WalkingWounded