The O’s take the opener but lose the series to the Brewers @ home, despite hanging tough for most of the series against the NL Central Division Champions. 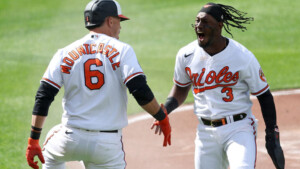 Game 1 : Orioles 2, Brewers 0 – Bruce Zimmerman tosses 4 shutout innings, allowing just 3 hits, walks 2 & strikes out 4 in the 30th anniversary of Camden Yards first ever Opening Day & the Orioles blank the Brewers to pick up their first win of the season. Cedric Mullins provides all the Orioles offense w/ a 2-run single in the 2nd, against Milwaukee starter, Adrian Houser as Zimmerman (the first Maryland born pitcher to start a home opener since 1990) & the bullpen make it stand up the rest of the way. Mike Baumann, Dillon Tate, Cionel Perez & Jorge Lopez combine for 5 innings of scoreless relief for Baltimore. 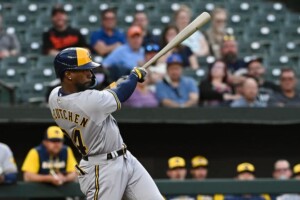 Game 2 : Brewers 5, Orioles 4 : Andrew McCutchen has 2 hits & drives in 3, Willy Adames also has 2 hits & scores 3 times as the Brewers rally to rebound & take Game 2 of the Series. McCutchen doubles home 2 in the 1st against O’s starter Spenser Watkins to put Milwaukee ahead but Cedric Mullins blasts a Grand Slam in the 2nd to put the O’s on top before McCutchen breaks a 4-4 tie in the 7th w/ a go ahead RBI single against the Orioles bullpen. After being shut out in 2 of their first 4 games, the Brewers bounce back to even the Series. Hoby Milner picks up his 1st win, in his 96th career game, that’s a Major League record. Baltimore loses for the 4th time in their first 5 games to start the season. 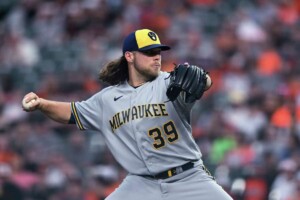 Game 3 : Brewers 4, Orioles 2 : Corbin Burnes pitches 7 shutout innings but fails to get the win as the Brewers rally in the late innings to take the lead & hold on to win the Series. Rowdy Tellez hits a 2-out RBI double & scores on a single by Mike Brosseau against O’s starter John Means in the 2nd to give Milwaukee the early lead & Means would depart after 4 innings w/ shoulder tightness. The O’s tie it up on an RBI single by Ryan Mountcastle & a sac fly by Trey Mancini in the 8th before Kolten Wong triples home a run & scores on the 2nd double of the night by Tellez. Josh Hader closes it out in the 9th as the Brewers win the Series.

Baltimore will have Thursday off before hosting the Yankees for 3, while Milwaukee will now head home for their home opener on Thursday against St. Louis.

Failure To Launch Hitting Back