The Orioles take 2 out of 3 against the Yankees @ home as they explode for 5 runs in the 8th inning of the finale, continuing their success against New York over the last 2 seasons.

Game 1 : Orioles 2, Yankees 1 (11 innings) – Ramon Urias walks w/ the bases loaded against reliever Aroldis Chapman to give the O’s the walk off win in a battle of the bullpens. The Orioles pen allows just 1 batter to reach base in 5 & 2/3 innings in relief of starter Jordan Lyles, who goes 5 1/3, allowing just a run on 6 hits, he strikes out 4 & walks 2. The O’s walk 10 times, including 3 in the 11th, go 1-15 w/ men in scoring position & the are now 6-70 w/ men in scoring position this season. New York goes 2 for 11 w/ men in scoring position themselves as they drop the opener. Baltimore improves to 9-11 against the Yankees dating back to last season. 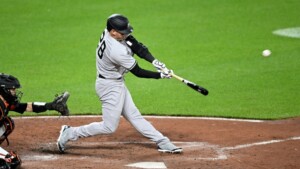 Game 2 : Yankees 5, Orioles 2 – Emerging from a 49-minute weather delay, Josh Donaldson drills a 2-run homer off of Travis Lakins in a 4-run 5th to put the Yankees ahead for good against the Orioles bullpen, which struggles a night after a dominating performance. Cedric Mullins hits a 2-out, 2-run blast in the 3rd to give the O’s the early lead but it would be short lived as the Yankees score 5 unanswered to win the game & tie up the Series. Lakins allows 4 runs on 5 hits in just an inning of work, he walks 1 & strikes out none in relief. Trey Mancini has 2 hits for the O’s but they continue to struggle w/ men on base. Baltimore is now 7-77 w/ men in scoring position so far as they continue to struggle in that area. Baltimore will look to take the Series in Game 3 on Easter Sunday.

Game 3 : Orioles 5, Yankees 0 : Nestor Cortes strikes out 12 Orioles in just 5 innings of work, but the Orioles score 5 times in the 8th against the Yankees bullpen to pick up a huge win & take the Series @ home. Cortes pitches 5 shutout innings, allowing only 3 hits & walking 1 but picks up a no decision as Roughned Odor’s pinch-hit 2-run single gives the O’s the lead & scores on a 2-run double by Kelvin Gutierrez, who scores on a single by Jorge Mateo in the 5-run uprising against Jonathan Loaisiga & Lucas Luetge. The Orioles go 2-28 w/ men in scoring position in the Series & are now 7-83 on the season before Odor, Gutierrez & Mateo. The Orioles win both games in their final at bat in a flair for the dramatic. Bruce Zimmerman tosses 4 scoreless innings, allowing 4 hits & 2 walks, striking out 6. The Orioles improve to 10-12 against the Yankees dating back to last season.
Bal (3-7) NYY (5-5)

Baltimore now heads to the West Coast to for a 7 day, 7 game road trip in Oakland & Anaheim, before heading back East to play these same Yankees in the Bronx. They are 2.5 games back in a crowded AL East so far.
⚾️⚾️⚾️
GO O’S!!
#GrowingUp