The O’s come into L.A. after losing 3 out of 4 in Oakland & take 2 out of 3 from the Angels in Anaheim, even rally to nearly earn the sweep as the confidence of this team has started to grow. 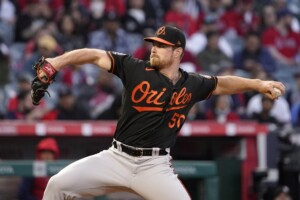 Game 1 : Orioles 5, Angels 3 – Bruce Zimmerman pitches 6 strong innings, running his season-opening scoreless streak to 14 innings, including striking out AL MVP Shohei Ohtani 3 times in a row, on just 12 pitches, fans 6 on the night as the Orioles rebound in Southern California to win the opener. Zimmerman allows 3 runs (but only 2 earned) on 5 hits & walks 2, he faces the minimum 15 batters through the first 5 innings & also gets some early help from the Oriole bats as Robinson Chirinos has 2 hits & drives in 3, including a 2-run single in the 1st against Angels starter Reid Detmers. It would be the only 2 runs allowed by Detmers, who goes 5 innings, allows 3 hits, walks 1 & strikes out 4 but the Angels bullpen gets hit hard as Archie Bradley surrenders 3 runs on 4 hits & departs after recording only 1 out in the 6th as Anthony Santander reaches on an infield single that scores Trey Mancini & scores on a grounder to short by Chirinos. Zimmerman strikes out the side (Ohtani, Mike Trout & Anthony Rendon) in an impressive 4th inning, also gets help from 3 double play balls that wipe out all 3 of the Angels first 3 hits. Trout goes 1-3 w/ a walk & a single in his first game back from a 3 game absence & Rendon launches a 2-run blast in the 7th to chase Zimmerman but the bullpen does the rest, using 3 relievers to close it out. Baltimore has now won twice in their first 5 games of this West Coast trip. 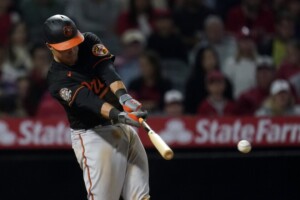 Game 2 : Orioles 5, Angels 4 – Ryan Mountcastle has 2 hits & drives in 3, including the go ahead RBI single in the 7th as the O’s overcome 2 MIke Trout homers to hang on & win the Series in Anaheim. The O’s score 2 in the 1st inning for the second straight game as Mountcastle singles in Cedric Mullins & Roughned Odor hits a sac fly that scores Anthony Santander to give starter Spenser Watkins some early insurance. Noah Syndergaard departs after 5 2/3 innings, allows 2 runs on 3 hits, walks 2 & strikes out 6 but becomes the 2nd Angels starter in a row to pick up a no decision. Trout hits solo blasts in the 1st & 5th innings to set the Angels record w/ 21 multi-homer games, as the Angels tie the game against Watkins, who goes 5 innings, allows 2 runs on 3 hits, walks 3 & strikes 2 to earn a no decision. Brandon Marsh hits a 2-run shot in the 6th that appears to put the Angels ahead for good until a 3-run 7th by the Birds against the Angels bullpen, in which all 3 runs were unearned. Trey Mancini’s sac fly cuts the lead to 1 & Mountcastle’s 2-run single gives the Orioles the lead for good. It’s the 11th time in Mountcastle’s young career that he has 3 or more RBI in a game. Baltimore has now won 2 straight for the first time this season & will go for their first 3-game sweep in Anaheim since 2010 in Game 3. 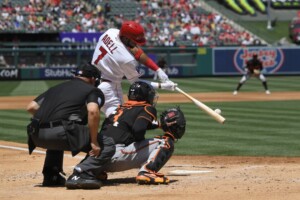 Game 3 : Angels 7, Orioles 6 – Jo Adell drills his 2nd career grand slam as the Angels score 6 times in the 1st inning without recording their first out but have to re-take the lead & hang on to win as the O’s rally to tie it late. O’s starter Chris Ellis is responsible for 5 of the 6 runs as he walks 2, hits a batter, allows a 2-run single & walks another to load the bases before departing w/ right shoulder discomfort. Travis Lakins comes in for him & immediately gives up the grand slam to Adell but records the next 9 outs before Keegan Akin works 2 more scoreless that allows the O’s bats to get back in the game, Trey Mancini hits a 3-run shot in the 3rd to cut the lead in half & Ryan Mountcastle adds an RBI single & scores on a 2-run shot by Austin Hays to tie the game against the Angels bullpen. Adell is 7-19 during a 5-game hitting streak he has hits in 9 of his last 11 games, including 3 HR’s. 6 Oriole pitchers combine to hit 2 & walk 9 batters on the day, including a bases loaded walk by Felix Bautista to Taylor Ward that gives the Angels the lead for good. Jimmy Herget works a scoreless 8th & Archie Bradley records his first save as an Angel as he gets Mountcastle to bounce into a 6-4-3 double play to end the game. Ohtani goes 2-4 w/ a walk & scores the game winning run after going 0-8 w/ 5 strikeouts in the first 2 games. Baltimore goes 3-4 on their 7 game, 7 day West Coast road trip & is playing some inspired ball right now.

The Orioles now head back East to play the Yankees in the Bronx before returning home to host Boston for 3 as they also got news that their Ace, John Means will be headed for Tommy John surgery & will be done for the season.
⚾️⚾️⚾️
GO O’S!!
#GrowingUpFast