The Orioles come into the Bronx feeling good about themselves after taking 2 out of 3 in Anaheim, but are brought back down to earth as they are swept by the Yankees in New York.

Game 1 : Yankees 12, Orioles 8 – Anthony Rizzo homers 3 times (his first career 3 HR game), drives in 6 runs & scores 4 times as the Yankees blown out the O’s early but stage off a late rally to take the opener. Rizzo launches all 3 homers to the short right field porch as he drills a 3-run shot in the 3rd & a 2-run shot in the 5th, sandwiched around a Joey Gallo solo shot in the 4th to give the Yankees the early 6-0 lead. O’s starter, Jordan Lyles allows 6 runs on 7 hits, walks 1 & strikes out 3 in just 4 2/3 innings as he is shelled in his worst Oriole start so far. Yankees starter, Luis Severino goes 6 strong, pitches a No-Hitter into the 6th before Jorge Mateo’s single – he allows 4 runs 3 hits, walks 2 & strikes out 5 to earn his 2nd win of the season. Anthony Santander cuts the lead in half w/ a 3-run blast off of Severino a few batters later but Gleyber Torres tacks on 3 more w/ a bases loaded triple in a 4-run Yankees 7th to blow the game wide open. The O’s respond w/ a 3-run 8th as Austin Hays homers for the 2nd straight game, launching a 2-run blast to cut the lead to 2. Aaron Judge hits a solo shot in the 8th, becoming just the 3rd Yankee to homer on his 30th Birthday to add another before Rizzo launches his 3rd homer of the night. New York wins for the 6th time in 7 games, while Baltimore loses for the 2nd time in a row & the 5th time in their last 8 games. 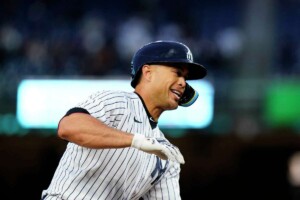 Game 2 : Yankees 5, Orioles 2 – Giancarlo Stanton hits his 350th homer (becomes the 7th fastest player to 350) has 2 hits & drives in 2 runs & Jordan Montgomery pitches 5+ innings, as the Yankees win their 5th in a row & 7th in the last 8 games, continue to surge in the AL East. Stanton blasts off in the 1st, against O’s starter Tyler Wells to give the Yankees the early lead & Joey Gallo also homers for the 2nd straight night & drives in a run, ending a 14-game homer drought as he hits a 2-run shot in a 2-run 7th inning. Isiah KIner-Falefa also scores on a wild pitch by O’s reliever Dillon Tate to tack on another. Anthony Santander drillls a 2-run shot in the 6th to tie game against Montgomery ,who allows 2 runs & 4 hits, strikes out 4 & walks none, he departs after hitting Austin Hays & Michael King pitches 2+ innings, striking out 2 & walking none in his first appearance since striking out 7 in a row against Cleveland. Wells allows 2 runs on 3 hits in 5 innings, he walks none & strikes out 4, also retires 13 out of the last 14 he faces after allowing the Stanton bomb. New York wins it’s 6th in a row, while Baltimore loses for the 3rd time in a row & 6th time in their last 9. 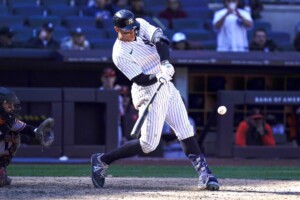 Game 3 : Yankees 10, Orioles 5 – The Orioles commit 5 errors on a slightly blustery afternoon in the Bronx & the Yankees take complete advantage as Aaron Judge drills a 3-run shot after SS Jorge Mateo commits his 2nd error when he misplays a grounder by DJ LeMahieu in the 5th & the Yankees blow the game open late after the O’s had taken an early lead. Kelvin Gutierrez singles home a run in the 2nd & Trey Mancini drives one in on a ground ball out in the 3rd against Yankees starter, Jameson Tailon, who allows 2 runs on 7 hits, walks 1 & strikes out 4 to put the Birds ahead early. O’s starter Bruce Zimmerman allows 4 runs on 5 hits, walks 1 & strikes out 5 in 4 1/3 innings but the bullpen is shelled as Mike Baumann allows 2 runs & Paul Fry gives up 4 in only 3 innings of work combined. Marwin Gonzalez hits a sac fly in the 6th, he also doubles & drives in a run & Josh Donaldson singles in a run in the 7th & TIm Locastro reaches on a throwing error by Baumann & scores on a wild pitch by Fry, to increase the lead. That’s when Judge launches the 3-run blast to put the game out reach. The O’s fight back to score 3 times in the 9th against Yankees reliever Ron Marinaccio as Austin Hays doubles & scores on a double by Roughned Odor, who scores on a single by Ryan McKenna but it would be too little too late. New York wins it’s 7th in a row as they sweep the O’s @ home. Baltimore has now lost 4 in a row & 7 of their last 10.

The Orioles will now head home for a 10-game homestand, starting w/ 3 against Boston on Friday & then Minnesota for 4 before finiishing up w/ Kansas City for 3.
Baltimore continues to play inspired despite a few tough losses.
⚾️⚾️⚾️
GO O’S!!
#Skidding