The O’s return home for a 10-game homestand after being swept in New York & get it started off on the right foot by taking 2 out of 3 from the Red Sox to get back some much needed confidence. 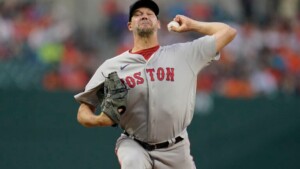 Game 1 : Red Sox 3, Orioles 1 – Kyle Bradish makes his major league debut & goes 6 strong innings but the Oriole bats are silenced by Boston pitching. Christian Arroyo hits a 2-run shot off of Bradish in a 3-run 2nd, as Christian Vasquez also singles in a run but is thrown out at 3rd trying to stretch it after an error by Trey Mancini in right. Arroyo’s homer is just the 1st in the Red Sox last 7 games & only it’s 2nd in their last 11. Rich Hill pitches 4 innings, allowing just 1 hit, strikes out 4 & walks none, he retires the first 12 he faces before allowing an infield single to Austin Hays to lead off the 5th. Tanner Houck then comes on & goes 3 innings in relief, followed by Jake Diekman for an inning & Hansel Robles for 2/3 of an inning. Robles gives up a solo shot to Ryan Mountcastle & a single to Hays but gets 2 outs before Matt Strahm walks the tying run on base but still records the 1-out save in the 9th. Bradish allows 3 runs on 5 hits, walks 1 & strikes out 2 over 6 innings in his major-league debut, after being called up from Triple-A Norfolk before the game. Baltimore has now lost 5 in a row & 4 in a row against AL East opponents. They would look to snap the skid in Game 2.

Game 2 : Orioles 2, Red Sox 1 (10 innings) – Jorge Mateo scores the winning run in the 10th on a throwing error by Boston P Hirokazu Sawamura, as the O’s rally in the late innings to win after trailing for the first 7. O’s starter, Spenser Watkins pitches 4 2/3 solid innings, allows 1 run on 5 hits, walks 1 & strikes out 3 as he gives the Orioles another strong outing by a starter but picks up a no-decision as the game gets turned over to the O’s bullpen the rest of the way, & the Orioles use 6 relievers to hold the Red Sox scoreless for 5 1/3 innings. Xander Bogaerts singles home the lone Boston run in the 1st against Watkins & Boston starter Nathan Eovaldi goes 7 dazzling innings, carries a 1-0 lead & a No-Hitter into the 6th, he retires 17 of the first 18 batters he faces (the lone man reaching on an error) before Cedric Mullins doubles to break it up in the No-Hitter in the 6th – Eovaldi gives up 3 hits over 7 scoreless, he strikes out 8 & doesn’t walk a man. Anthony Santander singles home Mullins who had doubled again, to tie the game in the 8th against Red Sox reliever Matt Barnes & it remains that way until the 10th. Robinson Chirinos drops down a bunt w/ men on 1st & 2nd w/ no outs in the 10th & Sawamura overthrows 3rd base on an attempt to get Mateo as the O’s walk it off to get the win. Baltimore snaps a 5-game losing streak & will look to take the Series in the finale.

Game 3 : Orioles 9, Red Sox 5 – Jordan Lyles tosses 6 tough innings & the Orioles score 6 times in the 6th inning, put up a season high 9 runs to take 2 out of 3 from the slumping Red Sox. Lyles allows 1 run on 7 hits, strikes out 6 & walks 3, also hits a batter & gets out of several tough predicaments before leaving after 6 – the O’s bullpen is a little shaky in closing it out late but still gets the job done. Red Sox starter, Nick Pivetta goes 4 shutout innings until he gets pounded in the 5th – Tyler Nevin’s 2-run single puts the O’s ahead for good & they would continue to pour it on as Santander adds a sac fly in a 3-run 5th & Odor drills a solo homer in the 6th (his first w/ the Orioles) but then the rains came & the game would be delayed for 2 hours & 5 minutes. When play resumes, Jorge Mateo doubles home 2, Anthony Santander adds a 2-run single & Ryan Mountcastle delivers an RBI single to cap a 6-run outburst. Pivetta allows 3 runs on 6 hits, strikes out 5 & walks none in 4 2/3 innings, the Red Sox bullpen allows 6 runs, including 4 allowed by Phillips Valdez in 2 innings alone. Back in the lineup after after a 3-game absence, J.D. Martinez launches a Grand Slam in the 9th off of reliever Travis Lakins to cut the lead to 4 but it was too little too late. Boston is 1-11 in Pivetta’s last 12 starts & has lost 7 straight. The Orioles move within a .5 game of the Red Sox in the AL East. Boston goes 3-7 on a 10-game road trip to Tampa Bay, Toronto & Baltimore.